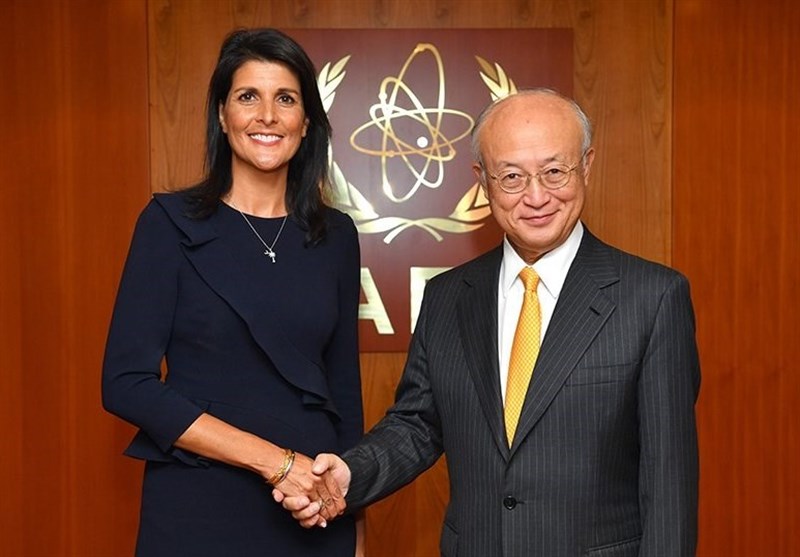 Iran’s mission to the International Atomic Energy Agency cautioned against the dire consequences of illegal pressures on the UN nuclear agency after the US UN envoy travelled to Vienna to press the IAEA on her reading of Iran’s compliance with the JCPOA.

Iran’s permanent mission to the IAEA issued the warning in a statement on Thursday, a day after US President Donald Trump dispatched US Ambassador to the UN Nikki Haley to Vienna to press the UN nuclear chief on their reading of Iran’s compliance.

The statement said the objectives and the results of Haley’s trip to Vienna “contradict” the Joint Comprehensive Plan of Action (JCPOA) and Resolution 2231, which the UN Security Council has adopted to endorse the nuclear agreement between Iran and the Group 5+1 (Russia, China, the US, Britain, France and Germany).

Iran is fully aware of its obligations under the Nuclear Non-Proliferation Treaty (NPT), the Additional Protocol and the JCPOA, and remains committed to their terms, the statement added.

However, Iran will not allow a specific country to take advantage of the rules for its own political objectives, it noted.

The statement also said that Iran expects the IAEA secretary general and its inspectors to perform their tasks regarding the JCPOA with professionalism and honesty.

Prior to her trip to Vienna, Haley claimed that the visit was a fact-finding mission and part of Trump’s review of the nuclear deal with Tehran.

In a letter dated August 19 but released on August 23, Iran’s Foreign Minister Mohammad Javad Zarif warned about US adherence to the nuclear deal.

Zarif also noted that Haley’s visit to the IAEA undermined “the independence and credibility” of the inspectors.

The trip is aimed at destroying the nuclear deal by raising doubts about the accord’s stability and sustainability, Zarif wrote.

“The publicly stated purpose of this visit raises several serious concerns over further violations of the letter and spirit of” the nuclear deal by the US, Zarif added.