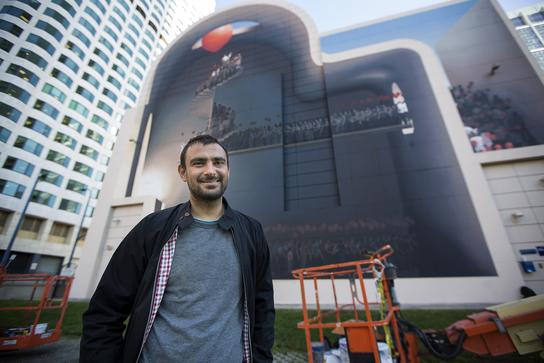 Mahdi Qadyanloo, an Iranian surrealist artist with more than 100 murals in different cities, has completed a painting on a wall in the US city of Boston.

Every autumn, an artist is commissioned to paint murals on the wall of transportation building of Rose Kennedy Greenway in Boston, US. This year, Mahdi Qadyanloo, a young Iranian artist, had the opportunity to exhibit his art on this wall. His mural titled “Spaces of Hope” has drown a lot of attention.

According to a Persian article by Honar Online, Qadyanloo has created many artworks in Iranian and European cities and tends to paint abstract themes using simple, geometrical shapes.

His Boston mural shows a closed setting with people waiting, where a balloon finds a hole in the framework’s ceiling to go out. This artwork, not as irrelevant to “American Dream”, pictures modern man’s imagination and dreams about a better life.

Qadyanloo, known for his surrealist paintings in Tehran, has created more than 100 paintings on the walls of different Iranian cities. His fame made its way to London in winter 2015, where he painted a mural titled “We didn’t start the play” on a wall in Shoreditch neighbourhood.

Then he held an exhibition of his artworks in London’s Howard Griffin gallery, a collaboration that offered him with artwork orders from US, Norway and India.

Qadyanloo was born in 1981 and graduated from Faculty of Fine Arts, Tehran University, with a degree in painting. In his biography, Qadyanloo refers to Iran-Iraq war as his most prominent memory of childhood, and admits that he turned to painting and beautification of urban spaces in an attempt to escape the eerie, grey space of his childhood memories.

Though it was merely an endeavour to beautify his surroundings at first, Qadyanloo persisted enough to make his artwork’s signature out of it, and made his way to Tehran and different world cities’ walls.