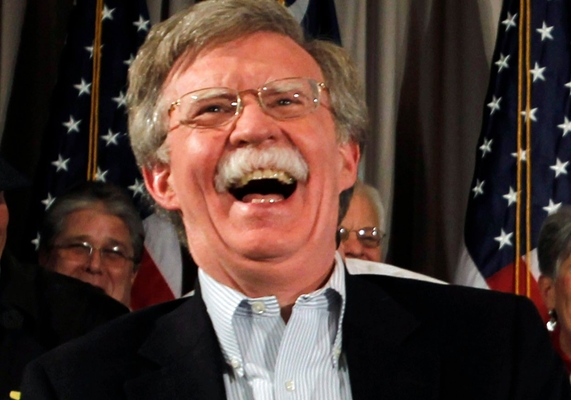 The Iranian Foreign Ministry spokesman has dismissed the latest “delusive” anti-Iran remarks by US National Security Advisor John Bolton, saying he is seeking to justify his previous wrong analyses, instead of understanding the culture of the great nation of Iran.

“John Bolton suffers from a totally chronic type of delusion regarding Iran and Iranians,” Bahram Qassemi told IRNA on Tuesday in reaction to Bolton’s Monday comments about the Islamic Republic.

“Despite all the self-made illusions and imaginations and the suggestions of certain allied terrorist groups, he is now seeing that the glorious rallies marking the 40th anniversary of the historic revolution of the great Iranian nation have faded away his naïve and weird dreams,” he noted.

“In a passive, hostile and highly angry reaction, and instead of understanding and learning about the culture of the great people of Iran and the deep roots of the Islamic Revolution, Bolton has once again used a bitter language which is out of touch with realities,” Qassemi said.

Instead of reconsidering his wrong insight and interpretation, Bolton has maintained his long-standing grudge, and raised naïve promises and imaginary notions in a bid to justify his earlier wrong analyses and unfulfilled prophecies, he said.

“Perhaps today is a good opportunity for the American official to take a look at what happened on the anniversary of the revolution with people’s massive turnout and [compare them with] what other malefactors had taught him, and [put aside] old and long-standing grudges against Iran and Iranians and think a bit instead of making such wrong statements,” he said.

Bolton, who in 2017 had vowed he would celebrate in Tehran before 2019, made comments against the Iranian government in a tweet on Monday.

Bolton said it was up to the Iranian government to change its behaviour and the US supports “the will of the Iranian people.”

His tweet came after millions of Iranians took to streets on Monday to celebrate the 40th anniversary of the victory of a revolution that toppled the US-backed rule of Mohammad Reza Pahlavi and created the Islamic Republic.