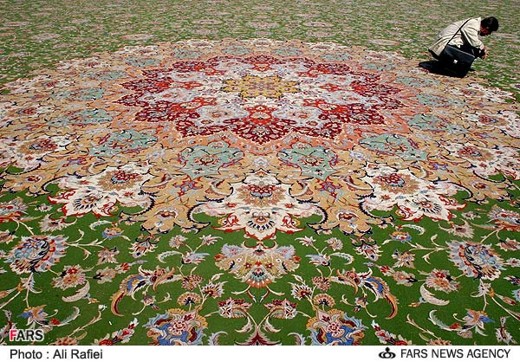 The carpet will cover an area of 10,000 square meters in the world’s third largest mosque.

Carpet weavers in the northeastern Iranian city of Neyshabour will weave a large carpet for the grand mosque of Algeria.

According to the website of the Islamic Culture and Relations Organization, the carpet will cover an area of 10,000 square meters.

A number of officials from Neyshabour, including the city’s MPs had previously suggested to Algerian Awqaf and Islamic Affairs Ministry that the mosque’s carpet be made by Neyshabour artisans.

Algerian officials have welcomed the idea and sent a letter to Iran via their ministry of foreign affairs, expressing willingness to host an Iranian delegation for final talks on the project.

Mohammadia Mega Mosque, whose construction began in 2012, is being built on a 218,525 square meter site in Algiers.

It will be the third largest mosque in the world after those of the holy cities of Mecca and Medina in Saudi Arabia.

The main attraction of the mosque will be a 265m-tall minaret.

The mosque complex comprises a multimedia library, the minaret, a research center, a meeting room, a prayer room that can accommodate nearly 35,000 people, a Quran school with residential facilities and a museum.

The world’s largest carpet at present is also an Iranian-made rug. It graces the main prayer hall of a mosque in Abu Dhabi, the United Arab Emirates.

Covering an area of 5,700 square meters, the four-piece rug was made in 21 months by more than 1,200 handpicked carpet weavers, 20 technicians, 30 designers, dyers and other skilled Iranian experts.

The production of the world’s largest handmade rug began in January 2006 by the Iran Carpet Company (ICC). The design work took six months, the weaving a year and the finishing work a further three months.