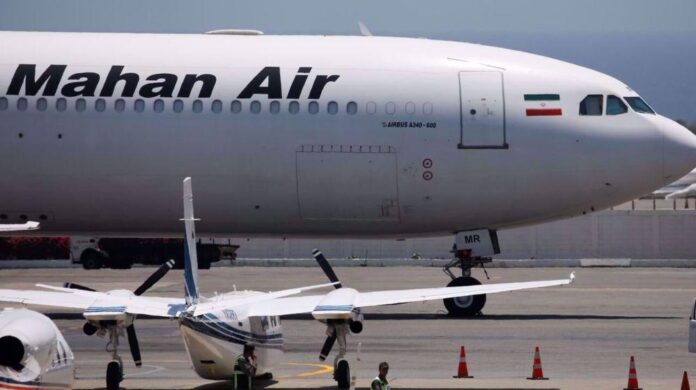 Tehran has pledged that it will take necessary action to make Washington regret the recent harassment of an Iranian passenger plane by two US fighter jets.

Addressing a press conference in Tehran Monday, Foreign Ministry spokesman Abbas Mousavi called the Thursday incident over the Syrian airspace a very dangerous “terrorist and hostile” act that contradicted all legal and international laws, adding the Islamic Republic will respond to it in due course.

“The Americans try all sorts of banditry,” Mousavi said, noting that the incident showed the US has begun resorting to “air piracy after maritime piracy” – an apparent reference to the American harassment of Iranian vessels in the Persian Gulf.

The incident saw the warplanes flying precariously close to Mahan Air’s Flight 1152 that had taken off from Tehran and was heading to Beirut.

Syria’s civil aviation authority located its airspace over the al-Tanf region as the place where the incident had happened.

The Central Command that directs US forces in Western Asia confirmed later that a single F-15 aircraft had made a “visual inspection” of the Iranian airliner over the US military base in al-Tanf.

The airliner’s pilot was forced to swiftly lower the altitude to avoid a collision with the American warplanes. The sudden swerve resulted in injuries to some of the passengers, who hit their heads against the plane’s ceiling. The flight, nevertheless, landed safely in the Lebanese capital, and all the passengers left the aircraft.

“The Iranian Foreign Ministry will definitely take all necessary measures, together with the General Staff of the Armed Forces, the Judiciary, and Iran’s Civil Aviation Organization, to make the Americans regret this episode,” Mousavi said.

The Islamic Republic’s mission to the United Nations has already begun taking some action, the spokesman said. Once the final report on the incident is out, Tehran will start taking other legal and diplomatic measures, including filing complaints and pursuing the matter, he added.

Mousavi then addressed the United States’ efforts to have the UN Security Council extend an arms embargo on Iran that is expected to expire under a 2015 nuclear deal between the Islamic Republic and world countries.

Under the nuclear deal, officially known as the Joint Comprehensive Plan of Action (JCPOA), the embargo on sales of conventional weapons to Iran will expire in October.

In May 2018, US President Donald Trump unilaterally pulled his country out of the JCPOA, thus taking away all of Washington’s rights as a signatory.

To try and rationalize its bid to prolong the embargo, the US claims it is still “named” as a JCPOA partner in the UNSC Resolution 2231 that endorsed the nuclear accord after it was concluded.

“We consider it to be kind of far-fetched for the US to be able to reach this goal,” Mousavi said, citing the Islamic Republic’s recent consultations with its allies concerning the matter.

“We do not think it is likely that various countries would bow down to the US bullying and illegitimate request,” he added.

The spokesman hoped that Washington would abandon its “futile” efforts, saying Tehran will be taking due countermeasures to avail itself of its legal and natural rights under the JCPOA.

Tehran and Moscow, he said, “needed to consult anew about their common interests and concerns and measures taken by certain countries”.

The trip’s agenda, he added, featured the US campaign to renew the arms embargo as well as the need for the renewal of the comprehensive Russo-Iranian cooperation agreement that is due to expire next March.

Mousavi said the Iranian foreign minister discussed the extension of the agreement and inclusion of some reforms in the renewed version.

‘Hook talks too much’

The spokesman, meanwhile, pointed to recent remarks by Trump’s point man on Iran Brian Hook, who has claimed that the US president was on the Iranian people’s side.

Speaking in a video message on Saturday, Hook also cited a Persian-language tweet by Trump during last year’s foreign-backed riots in the Islamic Republic, in which the US president had similarly alleged support for Iranians.

“How can the US president be standing by the Iranian people’s side? He is standing against the people of Iran” through the most draconian sanctions imposed on a country ever, he added.

Mousavi also cited Washington‘s refusal to allow the sale of medicine to Iran and its assassination of Iran’s top anti-terror commander, Lieutenant General Qassem Soleimani in Iraq this January.