Iran to Further Expand Its Missile Power If Pressured: IRGC 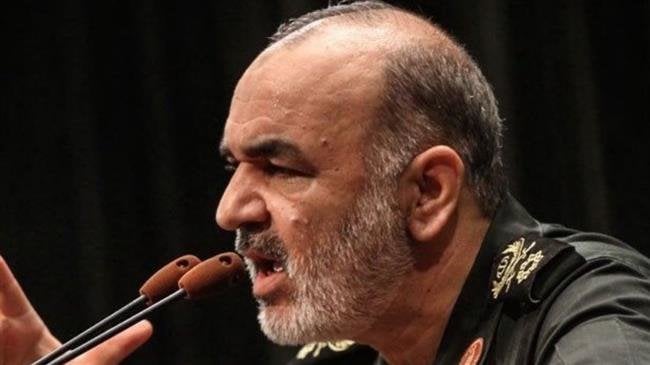 Deputy Commander of Islamic Republic Revolutionary Guards Corps (IRGC) says if Western powers seek to limit Iran’s missile power, the country will have no option but to expand its potentials in the strategically important field.

Brigadier General Hossein Salami said late on Saturday that Iran’s strategy to maintain a cap on its missile power will change if the European Union and others seek to force the country into disarmament.

“If the Europeans and others want to pursue the missile disarmament of the Islamic Republic of Iran based on a conspiracy, we will have no option but to resort to a strategic leap,” said Salami while speaking to the Iranian television.

The commander said Iran had no technical limits to expand the range, the destructive power and the propulsion system of its missiles, adding that it was Tehran’s policy to maintain a certain cap on the range of the missiles based on its own defensive strategy.

Salami said, however, that cap could be removed if others decide to pressure Iran into dismantling its long-range missile arsenal.

“Our defense strategy can change commensurate with the conditions and changes in the behavior of role-players,” said the IRGC commander.

The remarks come amid statements by certain EU governments about the need for Iran to avoid long-range missile tests in order for the country to enjoy the economic benefits of a nuclear agreement it signed in July 2015 with world powers.

Iran has repeatedly dismissed the statements, saying its missile program is not up for negotiation as part of efforts to preserve the Joint Comprehensive Plan of Action (JCPOA), an international deal on the country’s nuclear activities which has suffered as a result of a decision last year by the United States to unilaterally withdraw from the agreement.

Iran on Saturday unveiled a surface-to-surface missile with a range of more than 1,350 kilometers during celebrations marking the 40th anniversary of the 1979 Islamic revolution.

The missile, named Hoveyzeh after a city in southwest Iran known for its resistance during the 1980s Iraqi war, was showcased at an exhibition of defense achievements in Tehran on Saturday.