Iran to Firmly Respond to US Senate Vote on Anti-Iran Legislation: Rouhani 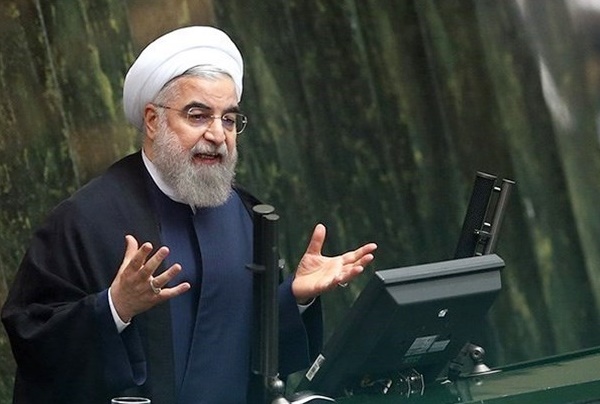 Iran’s President Hassan Rouhani has denounced a recent US Senate vote on a piece of anti-Iran legislation as a blatant infringement of last year’s nuclear deal between Tehran and six world powers, saying the Islamic Republic will give a firm response to the move.

President Rouhani made the remarks in the Iranian Parliament (Majlis) on Sunday as he submitted the government’s proposed budget bill for the next Iranian fiscal year, which begins on March 21, to the legislative body.

The Iranian chief executive further said the Islamic Republic would never violate last July’s nuclear deal, known as the Joint Comprehensive Plan of Action (JCPOA), which he described as “a signed and sealed international document.”

Iran “will not tolerate the JCPOA’s violation by any of the P5+1 group of countries,” adding that the US Senate’s vote to extend the Iran Sanctions Act (ISA) for a decade is “in blatant contravention of the JCPOA, and will be followed by Iran’s decisive response.”

The US Senate approved the ISA renewal 99-0 on Thursday after it easily cleared the House of Representatives last month.

The sanctions law, which would authorize the US president to impose sanctions on Iran, was first adopted in 1996 to punish investments in the Islamic Republic over its nuclear program.

The ISA now needs President Barack Obama’s signature to be turned into law.

Since January, when the JCPOA took effect, the International Atomic Energy Agency, which monitors the deal’s implementation process, has in numerous reports confirmed Iran’s commitment.

Reacting to the Senate vote on Saturday, Iranian Foreign Minister Mohammad Javad Zarif said the ISA’s extension would have no “executive effect” and would merely be a sign of the US government’s unreliability.

Last month, Leader of the Islamic Revolution Ayatollah Seyyed Ali Khamenei warned that Iran would consider the extension of the ISA a breach of the JCPOA and would respond accordingly.

Elsewhere in his remarks, President Rouhani expressed satisfaction with his administration’s handling of the economy, saying the government is “proud” that it could fulfill its promise of reaching single-digit inflation.

The Iranian government managed to “reduce the above-40-percent inflation to below 10 percent in less than three years,” he added.