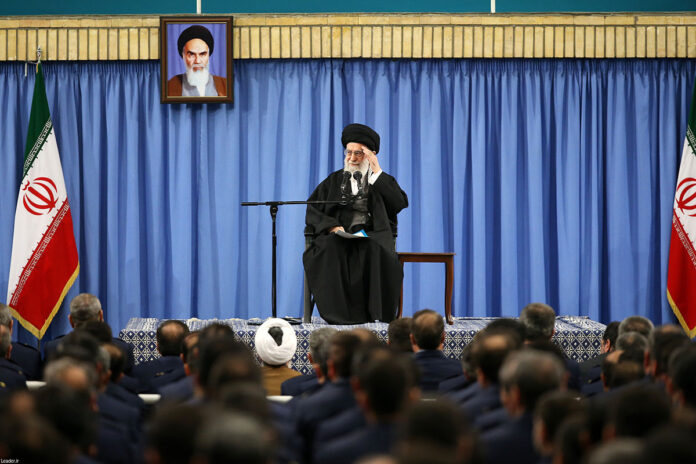 Leader of Iran’s Islamic Revolution Ayatollah Seyyed Ali Khamenei said the Islamic Republic is grateful to US President Donald Trump because it no longer needs to work hard to show Washington’s true face: Trump is doing whatever Iran spoke of in past 30 years.

Speaking in a meeting with Iranian Air Force commanders and personnel in Tehran on Tuesday, Ayatollah Khamenei said Trump should be thanked because “he did the job for us of showing the US true face.”

“During the [US] election and after it, this gentleman (Trump) came along and laid bare the political, economic, moral, and social corruption within the US establishment that we had been speaking of for thirty-odd years,” Ayatollah Khamenei said.

“Now, too, with what he’s been doing, hand-cuffing a five-year-old [and other things], he is showing what American human rights really mean,” the Leader said.

The Leader also noted the Iranian people will be responding to Trump’s recent anti-Iran threats on the upcoming anniversary of the 1979 Islamic Revolution.

“Trump says, ‘Fear me!’ No. The [Iranian] people will respond to these remarks on Bahman 22 [February 10] and will show what position the Iranian people assumes vis-à-vis threats,” the Leader said.

Ayatollah Khamenei was referring to the date on the Persian calendar coinciding with the anniversary of the February 11, 1979 Islamic Revolution, when the Iranian nation stages countrywide rallies celebrating the Revolution’s victory.

Trump had tweeted earlier in the month that “Iran is playing with fire – they don’t appreciate how ‘kind’ President Obama was to them. Not me!”

The Leader said, “The US’s new president says, ‘You should be grateful to [former US President Barack] Obama! Why? Should we be thankful for Daesh [ISIS], the flames [of violence] in Iraq and Syria, and open support for the 2009 sedition [in Iran]?” the Leader noted, as reported by Press TV.