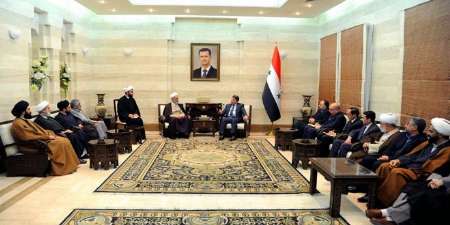 Head of Iran's Endowment and Charity Affairs and Syrian Prime Minister Wael al-Halqi underlined the need for the expansion of cultural and religious tourism cooperation.

The two sides discussed signing new cooperation agreements, means to develop religious tourism and facilitating procedures for the visits of the Iranian pilgrims to holy sites in Syria, and exchanging religious missions.

Al-Halqi affirmed that the cultural, intellectual, and religious ties that bind the two countries and their people helped strengthen the historical relations and the political strategy between them.

He reaffirmed that the Syrians alone will resolve the crisis without any interference or external dictation, hailing the Iranian positions towards Syria.

For his part, Mohammadi said the Iranian people are standing alongside the Syrian people and leadership in confronting the terrorist war imposed on them, pointing out that this war is a war on Islam and seeks undermine the security of the whole region.

Syria’s Speaker of the People’s Assembly Mohammad Jihad al-Laham also met Mohammadi, affirming to him the importance of the strategic relationship between the axis of resistance states in order to achieve security and stability and to form an impervious barrier in the face of colonialist ambitions, particularly the ambitions of the Israeli occupation which is trying to control the region.

In turn, Mohammadi praised the victories achieved by the Syrian Arab Army against terrorism and its supporters.

Meanwhile, Syrian Minister of Religious Endowments Mohammad Abdul-Sattar al-Sayyed stressed during his meeting with Mohammadi the importance of promoting Islamic unity and the right Islamic thought to face the Wahhabi Takfiri thoughts.

Al-Sayyed considered the meeting an opportunity to express on behalf of scholars and preachers thanks and gratitude to the Iranian government and people for their standing by the Syrian people in their war against terrorism.

For his part, Mohammadi renewed Iran’s support for the Syrian people stance in facing the Takfiri terrorist thought, noting the efforts made by the Syrian scholars and preachers in promoting moderation and stability on the original Islamic approach.

Mohammadi called for closing ranks of the Islamic Nation, putting differences aside, emphasizing unity, reaffirming Iran’s support to Syria in facing the terrorist war that it witnesses and the need to develop relations of cooperation and exchange between the two countries.