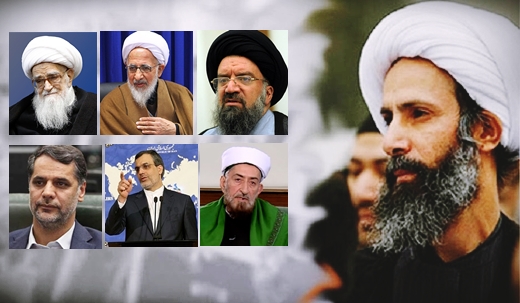 Iranian officials have denounced the execution of a prominent Shiite cleric, urging the world of Islam to show reaction to the killing of Sheikh Nimr al-Nimr.

Mehr News Agency on January 2 covered, in separate news reports, reactions by Iranian officials to the execution of the top Shiite cleric in Saudi Arabia. The following is the translation of part of those reports:

Grand Ayatollah Safi Golpaygani, a source of emulation, in a message condemned the execution of Sheikh Nimr al-Nimr.

He said the execution of Ayatollah Nimr will smooth the way for the fall of the Saudi regime.

He also offered condolences to people of the Muslim world, to the Saudis who are sick and tired of the crimes committed by the brutal regime in Riyadh, as well as to the bereaved family of this “esteemed martyr”.

Grand Ayatollahs Javadi Amoli and Sobhani and Ayatollah Shahroodi too issued separate messages in condemnation of the Saudi act.

Ayatollah Ahmad Khatami, a member of the Assembly of Experts, said that the execution of Sheikh Nimr is one link in the chain of crimes committed at the hands of the Al Saud family.

Tehran’s Friday prayer leader further said that since its emergence, the Saudi regime has resorted to barbarism and violence, adding that the regime’s aggression against Yemen will remain as a stain on the reputation of the Saudi regime forever.

Khatami went on to say that the world of Islam is expected to react to Sheikh Nimr’s execution and reveal the true colors of the criminal regime of Saudi Arabia, urging the Iranian foreign diplomacy machine to take a proper stance in this regard.

He went on to say that the Saudi government supports terrorists and Takfiri extremists, and uses the language of execution and suppression in talking to its critics at home.

A member of parliament’s National Security and Foreign Policy Committee said that the hasty decisions of Saudi Arabia are worse than crimes committed by ISIS terrorists, adding that Saudi Arabia killed Sheikh Nimr on behalf of the Zionist regime.

Hossein Naghavi Hosseini further said that what the House of Saud did was an inhumane, undemocratic and medieval act which could set a [dangerous] precedent in issuing verdicts against Muslim clerics.

The MP also said that such rash decisions reveal the back-to-back failures the Saudi regime has suffered following its interventionist measures in Yemen, Syria and Iraq, adding that the Muslim world will show reaction to the recent decision of Riyadh.

Meanwhile, the Qom Seminary announced it will close all its classrooms on January 3 in protest.

Professors, students and scholars of the school are to stage a sit-in to declare their objection to and hatred of the execution of the outstanding Saudi cleric.

The Sunni Friday Prayer Leader of Sarakhs [a town in Khorasan Razavi Province in northeastern Iran] said that the execution of Sheikh Nimr al-Nimr is indicative of a lack of freedom of opinion and expression.

That anybody who expresses their idea should be executed amounts to interference in Islam’s social and religious regulations, Molavi Ahmad Parsa said.

And the Sunni Friday Prayer Leader of Piranshahr [a town in West Azerbaijan province in northwestern Iran] said that the Saudi government is Wahhabi and Wahhabism lacks compassion and kindness.

“They just endear their deviant ideas and do not accommodate the ideas of other Muslims,” he said.