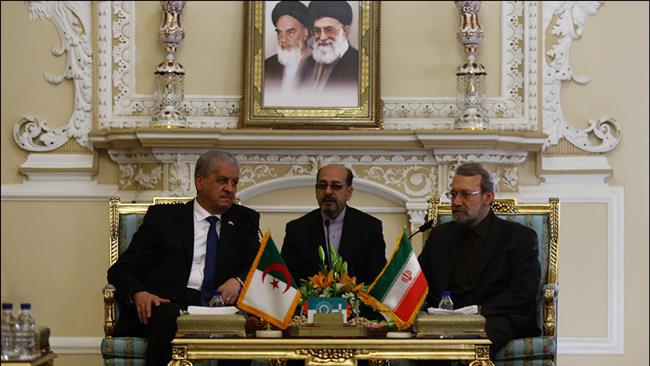 In a meeting with the Algerian prime minister, Larijani added that certain regional countries’ support has helped terrorist groups cause insecurity in the Middle East.

The issue of human rights has been used as a tool by some countries to create insecurity and instability, Larijani said in a meeting with Algerian Prime Minister Abdelmalek Sellal in Tehran on Monday.

He added that certain regional countries’ support has helped terrorist groups cause insecurity in the Middle East.

The Majlis speaker further pointed to appropriate capacities of Algeria and North African countries to boost economic and political cooperation with Iran and expressed hope that the formation of Iran-Algeria Joint Economic Commission would improve mutual cooperation.

Larijani said Algeria has always pursued an appropriate stance on Iran’s nuclear issue and the Syrian crisis, which will consolidate Tehran-Algiers cooperation as the two countries hold a similar position on international developments.

The Algerian premier, for his part, called on all countries to strengthen their cooperation in fighting terrorist groups, including Daesh [Arabic acronym for ISIS].

Sellal said Daesh terrorist group is tarnishing the image of Islam and added that Muslim countries should remain vigilant to prevent Westerners from achieving their own objectives.

He emphasized that Iran can play an effective role in restoring security to the region and improving economic relations with countries, including Algeria.

The Algerian prime minister traveled to Tehran to attend the third summit of the Gas Exporting Countries Forum (GECF) which was held on Monday.