Iran Shows Satellite to Reporters in Rebuttal of US Claim 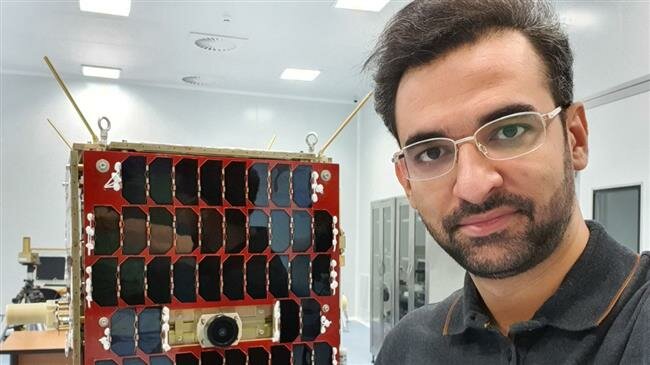 Iranian Minister of Information and Communications Technology Mohammad Javad Azari Jahromi took the reporters on Saturday morning to a space research center, where the domestically-made satellite was showcased undamaged.

It came one day after Trump posted on Twitter a black-and-white photo of what he claimed to be a “catastrophic accident” at the launchpad in a space center in Iran’s northern Semnan Province, saying it involved Safir (ambassador) satellite-carrier rocket.

“The United States of America was not involved in the catastrophic accident during final launch preparations for the Safir SLV Launch at Semnan Launch Site One in Iran. I wish Iran best wishes and good luck in determining what happened at Site One,” Trump said.

Some media reports said that the picture showed a third failed attempt by Tehran to lift a satellite into space.

Azari Jahromi, however, took to Twitter to reject the reports, saying, “Frankly, Nahid 1 is doing well, is in the laboratory, and reporters can come visit.”

In February 2015, Iran placed its domestically-made Fajr (Dawn) satellite into orbit, which is capable of taking and transmitting high-quality photos to stations on Earth.

In January 2019, the domestically-built Payam (Message) satellite was launched into space with an aim to collect environmental information; however, technical problems that occurred during the final stage of the launch prevented the spacecraft from reaching orbit.