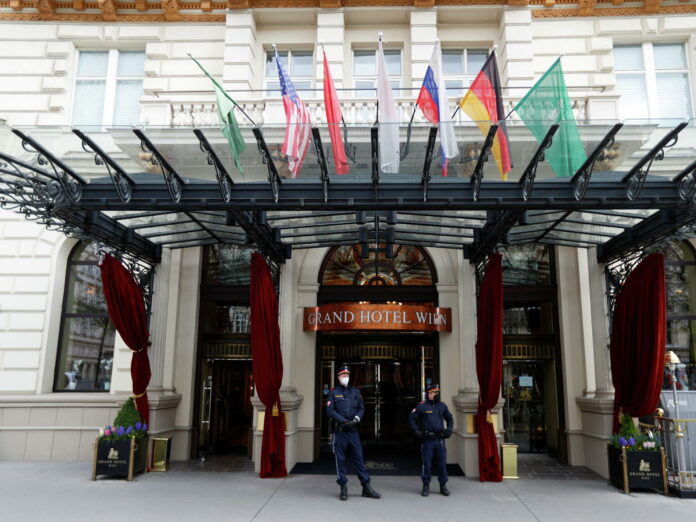 Iran’s deputy foreign minister says the purpose of the forthcoming negotiations in the Austrian capital is to remove all sanctions imposed by the United States, and the talks will not be about the nuclear issue.

“The main purpose of these talks from the Islamic Republic of Iran’s standpoint is to remove the illegal sanctions imposed on the Iranian nation by the US government in blatant violation of the JCPOA (the Joint Comprehensive Plan of Action) and the UN Security Council Resolution 2231,” Ali Baqeri said in an exclusive interview with Press TV in London.

Baqeri added the talks will not be about the nuclear issue, which has already been resolved, but will rather focus on the US withdrawal from the 2015 multilateral deal and the termination of its illegal sanctions against the Islamic Republic.

“What Americans did by leaving the nuclear deal was not only in violation of the JCPOA, but also the UN Security Council Resolution 2231. The objective of the negotiations is to remove US sanctions, both slapped in the past and in the wake of their withdrawal from the nuclear deal,” he noted.

The senior Iranian diplomat explained that the remedial measures that Tehran took in response to the US withdrawal from JCPOA are within the legal rights stipulated in Article 26 of the nuclear deal, which grants a party the right to suspend its contractual commitments in case of non-compliance by other signatories and let go of some of the restrictions imposed on its nuclear energy program.

He said Iran is seeking practical guarantees that the international deal would not be violated by the United States anymore.

“Not only did they (Americans) hurt Iranians by withdrawing from the nuclear deal, violating the UN Security Council Resolution 2231 and imposing sanctions on Iranians, but they also harmed the parties to the deal as they had business transactions and contracts with Iran,” Baqeri added.

He also lauded his recent conversations with officials from France, Germany and the United Kingdom, saying they were straightforward and serious.

“Those conversations were clear and progressive. I shared our perspective on the necessary framework for the upcoming talks in an unequivocal and very transparent manner. I also shared with them what our expectations of the upcoming negotiations are,” the Iran’s top negotiator pointed out.

“What is important for these European countries is to pursue their own interests rather than those of anyone else,” Baqeri continued.

The Iranian diplomat also hailed his talks with officials from the UK Foreign Office as positive, stating that the two sides had comprehensive discussions on bilateral relations, regional issues and future sanctions-removal talks.

Envoys from Iran and the P4+1 group of countries — Britain, France, Russia, and China plus Germany — are expected to hold the seventh round of discussions in the Austrian capital on November 29.

Former US President Donald Trump left the JCPOA in May 2018 and reimposed the anti-Iran sanctions that the deal had lifted. He also placed additional sanctions on Iran under other pretexts not related to the nuclear case as part of his “maximum pressure” campaign.

Following a year of strategic patience, Iran resorted to its legal rights under the JCPOA, which grants a party the right to suspend its contractual commitments in case of non-compliance by other signatories, and let go of some of the restrictions imposed on its nuclear energy program.

The US administration of Joe Biden has announced it is willing to compensate for Trump’s mistake and rejoin the deal, but it has shown an overriding propensity for maintaining the sanctions as a tool of pressure.

Tehran insists that all sanctions must first be removed in a verifiable manner before the Islamic Republic reverses its remedial measures.

Separately in another interview with Bloomberg, Baqeri said European signatories to the 2015 Iran nuclear deal have a critical role to play once talks resume in the Austrian capital.

They could provide powerful tools to bolster the agreement, he stated, especially employing blocking statutes to protect European companies doing business with Tehran from any future American sanctions.

“The use of their capabilities and means, including blocking statutes,” could definitely help, the deputy Iranian foreign minister continued, adding, “We want all the sanctions that are contrary to the nuclear deal to be lifted, whether that’s from the [Barack] Obama or Trump era.”

Asked if the nuclear talks will pick up from where they were stalled months ago, he noted, “The important point is that we reach an agreement that leads to a practical result.”

That might involve blending achievements from the previous rounds of talks and “part of it might be about matters outside of that,” Baqeri stated.

He highlighted that Iran had “good and constructive cooperation with the IAEA (International Atomic Energy Agency),” and he saw no reason for “any negative interaction with the agency.”

The top Iranian diplomat also said that a 400 million pound ($535 million) debt owed by the UK to Tehran over a decades-old military contract will hopefully be settled “soon,” and that the two countries are trying to work out how the payment can be made.

Baqer added the matter had been discussed in his meeting with British Foreign Ministry officials on Thursday.

“The main issue about paying the debt and its level is agreed, but the method and process of how the payment is made hasn’t yet been resolved,” he said, adding that the discussions will continue in Tehran next week.

The International Military Services (IMS), a subsidiary of the British Ministry of Defense, signed contracts in 1971 to sell more than 1,750 Chieftain tanks and armored vehicles to Iran. The deals were canceled after the Pahlavi regime was deposed in the 1979 Islamic Revolution, but Iran had already paid for the undelivered tanks and demanded its money back.

An international arbitration in 2008 ruled that the UK owed the debt, but it has not been paid off yet.

Iranian officials have denied any link between the case and the issue of Nazanin Zaghari, an Iranian who was arrested for spying in 2016.

Zaghari has been sentenced to prison in Iran for involvement in anti-government activities.