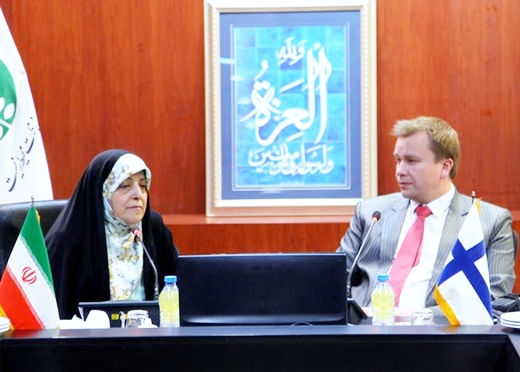 Iran’s head of Environmental Protection Organization and chief of the Finnish Parliament Foreign Affairs Committee conferred on environmental cooperation on Mon. in Tehran.

Ebtekar also added that the two countries can expand cooperation in preserving wetlands such as Hamoun (shared between Iran and Afghanistan) or Lake Urmia.

She noted another area for cooperation as measuring and monitoring air, water and soil quality, saying Iran has so far implemented many projects in this regard such as installing online monitoring cameras, and establishing and improving air pollution monitoring stations.

She further announced that Iran will host a conference on religion, culture and environment in the near future which aims to establish a connection between environment, peace and religions.

Antti Kaikkonen, for his part, stressed that Iran and Finland have many potentials for improving cooperation in environment, adding “Helsinki can cooperate with Tehran in various environmental fields such as production and storage of clean energy, energy efficiency and waste management.”

“Finalnd can transfer the technology of energy efficiency to Iran so that the country would be able to reduce greenhouse gas emissions,” he said.

Kaikkonen further expressed his country’s readiness to take steps toward the implementation of Iran-Finland environmental MoU.

Kaikkonen had also held a meeting with Iranian Foreign Minister Mohammad Javad Zarif on Sunday, during which the two sides conferred on the latest developments in bilateral ties and regional issues.