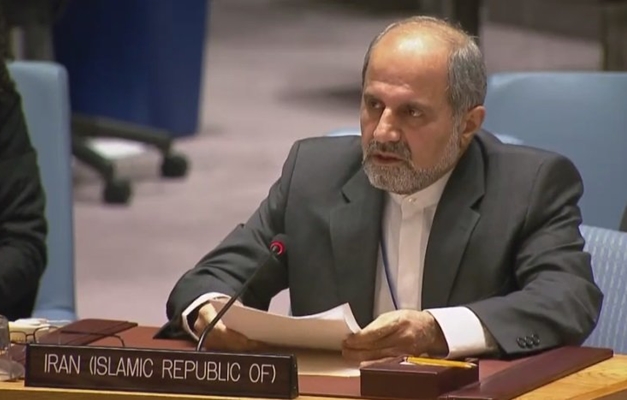 Iran’s deputy ambassador to the United Nations Es’haq Al-e Habib has lashed out at Washington for its unilateralist policies, saying the international trading system is being jeopardized by such harsh and unilateral behaviour.

“The United States’ unilateral, aggressive, illegal and illegitimate actions have unprecedentedly increased in the face of international silence and threatens the foundations of multilateralism,’’ the Iranian envoy said in a Monday speech at the UN General Assembly.

“One cannot ignore the fact that commitment for multilateral cooperation as the basis of the fulfilment of obligations and implementation of international agreements is facing unprecedented and growing pressure,” he added.

He noted a report by the UN secretary general about the extent to which development objectives have been achieved shows a little progress in that regard and suggests the most vulnerable countries still experience the most pressure.

He said one of the reasons behind the current unpleasant trend is that developed countries have not made good on their commitments in domains related to financing, the transfer of technology and creating potential in developing nations.

Funding development is facing an unprecedented challenge and the numerous blows dealt to unilateralism have caused problems for development and its financing.

“Policies based on sanctions have made the multilateral financial and trade system very inefficient, and now it falls upon the international community to guarantee that the funding of development will not be hijacked by certain countries by adopting unilateral aggressive actions,” he added.

“International trade remains the main driving force behind growth, welfare and development, and every independent country is entitled to be able to part of the multilateral international trade system, a system which needs to be global and act in a transparent, predictable and open manner based on law and regulations without being influenced by political considerations,” he added.

“The responsibility of the international community becomes more obvious when illegal unilateralism as well as unfair and illegitimate economic and political sanctions is jeopardizing the life of a nation and targeting it with economic terrorism,” he added.

“It is an innate responsibility of the international community to adopt a resolute decision and take firm steps based on political commitments to take action to fully eliminate such illegal moves and create a proper atmosphere at all levels for the fair and balanced development of all countries,” he said.

“Despite all sanctions and restrictions imposed on it, the Islamic Republic of Iran is set to bring a future full of hope and dignity and prosperity for the Iranian nation and help realize a world devoid of poverty, hunger, ignorance, illness and climate challenges,” he said.

Elsewhere in his remarks, Iran’s UN ambassador touched upon climate change and the adverse effects of the global challenge.

“Climate change is one of the most important challenges of our time, and the UN convention on climate change has specified the duties and responsibilities of countries in order to tackle this challenge,” he noted.

He said the long-term objectives set forth in the convention will be achieved only when developed countries accept their responsibilities toward developing nations.

“It should not be forgotten that under international climate documents, developed countries are obliged to take specific actions to transfer technology and provide enough and timely funding in that regard,” he added.