Iran Says US Can Join JCPOA Talks If It Lifts Sanctions 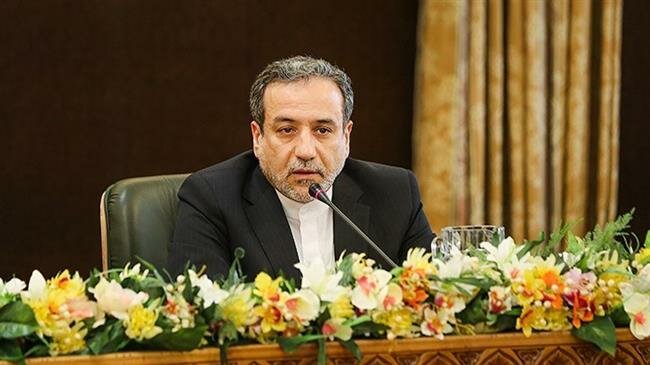 Iran says the United States can take part in the meetings of the signatories to the Iran nuclear deal — from which Washington has withdrawn — on the condition that it lifts sanctions against the country’s oil and banking sectors.

Iran’s Deputy Foreign Minister for Political Affairs Abbas Araqchi made the remark during a press conference about the deal in Tehran on Sunday.

Along with two other senior officials, Araqchi detailed Iran’s latest move in scaling back its commitments under the deal, officially known as the Joint Comprehensive Plan of Action (JCPOA), after the European signatories missed a 60-day deadline to offset the adverse impacts of the unilateral US pullout.

“The US has withdrawn from the JCPOA and cannot use any of its mechanisms, but it can attend the P4+1 meetings on the said conditions. Our first condition [for the US] is [the lifting of] oil and banking sanctions. Other sanctions would be considered as well,” Araqchi, who was a senior negotiator in the talks that led to the JCPOA, said in his Sunday remarks.

He stressed, however, that the deal would under no circumstances be renegotiated and that it should be implemented precisely as it is.

The Iran deal took some 22 months to negotiate. Iran, the US — under the then-administration of US president Barack Obama — France, China, Russia, Germany, and the United Kingdom were the original parties to the deal. Iran’s partners were collectively known as the P5+1 until US President Donald Trump unilaterally withdrew America in May 2018.

All of Iran’s other partners have stayed in the agreement and are now referred to as the P4+1. They have been regularly holding meetings with Tehran to discuss the implementation of the international pact.

Despite his withdrawal and subsequent bellicose posturing toward Iran, Trump has also said he is ready to negotiate with the Islamic Republic without preconditions.

Araqchi said there would be diplomatic visits in the coming days, including in the form of a JCPOA ministerial meeting.

“We do not want trips that serve as political shows; we want ones that get things done toward rectifying the present situation regarding the JCPOA,” he said.