Iran, Russia and Syria to Use Diplomacy to End Bloodshed 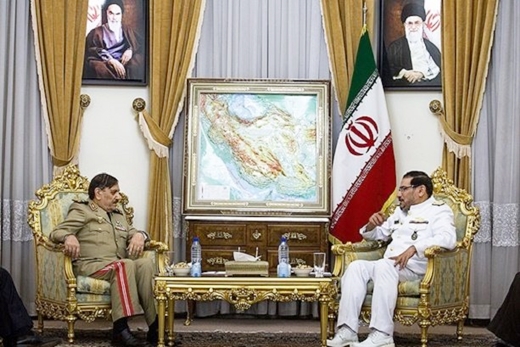 Iran’s SNSC Secretary said that with further military cooperation between Iran, Russia and Syria against terrorism, the three countries can also activate their political capabilities to achieve a comprehensive strategy to stop war and bloodshed.

Ali Shamkhani, Iran’s Secretary of Supreme National Security Council (SNSC), made the remarks in a meeting with Syrian Minister of Defense Fahd Jassem al-Freij on the sidelines of Iran-Russia-Syria trilateral meeting on fighting terrorism on Thursday June 9, while hailing the continuing successes of the Syrian army and the people in liberating various parts of the country from terrorist groups.

Shamkhani reaffirmed Iran’s continued support for Syria until the complete eradication of terrorist groups in that country, saying, “Today, Syria is the front line confronting a highly dangerous threat that, if not suppressed, will spread its roots across the world.”

He further deemed the politicized and unconstructive approach of the US and other western and regional allies toward the Syrian crisis a cause for escalation of political and military tensions, adding that “Backing terrorist groups while offering political solutions to resolve the conflict at the same time is a blatant contradiction, which has called the integrity of these countries into question.”

He further deemed the trilateral meeting of Iran-Russia-Syria on countering terrorism ‘highly successful’ and ‘decisive’, adding “The close coordination between the three countries at different levels will continue within the framework of new plans for cooperation.”