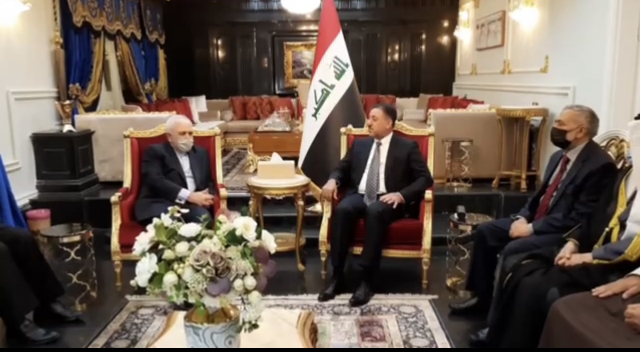 Irannian Foreign Minister Mohammad Javad Zarif has sat down with Leader of the Legitimate Arabic Centre of Iraq Khamis al-Khanjar as well as a host of Sunni representatives of the Iraqi Parliament and other prominent Sunni figures.

In the Monday meeting, which was part of Zarif’s meetings with Iraqi political and religious figures, the top Iranian diplomat touched upon Tehran’s opposition to sectarianism as well as the necessity of unity in the Islamic community and among different groups.

Zarif also referred to the status of holy Quds in Iran’s foreign policy, saying Tehran will continue to stand by world Muslims of different faiths despite all existing pressure.

He said Iran’s behaviour is defined based on partnership with its friends.

He underscored the need for a logical and rational relationship between Iraqi groups, saying Tehran respects the diversity of religious, ethnic and political groups in Iraq.

In addition to Khamis al-Khanjar, some other top members of the Legitimate Arabic Centre were also present at the meeting where they discussed, in detail, their viewpoints about Iraqi issues.