Iran Rejects US Claims in Letter to UN Chief, UNSC 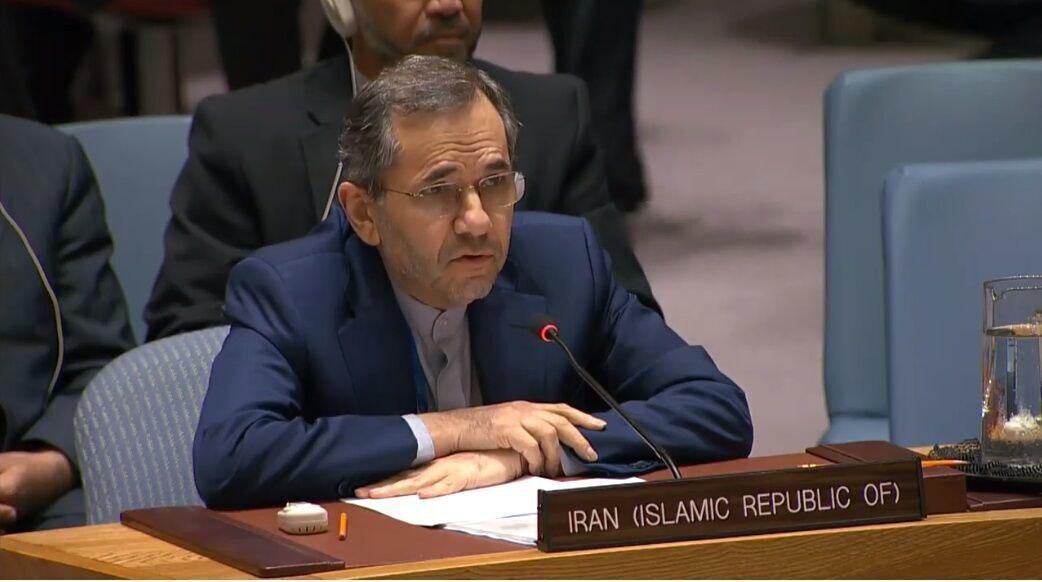 Iran has submitted a letter to the UN Secretary General and the UN Security Council, rejecting the US’ accusations over the recent attacks on Saudi oil facilities as well as the country’s ballistic missile and space activities.

In the letter, Iran’s Ambassador to the UN Majid Takht-Ravanchi has highlighted that Washington routinely points the finger at Iran for any incident.

“Some US officials’ modus operandi is to blame Iran immediately, without exception and without any evidence, for any incident, regardless of where it happened and who was behind it,” read part of the letter.

“This is a ‘maximum deception’ campaign in line with the United States’ so-called ‘maximum pressure’ policy against Iran,” read the letter.

“It goes without saying that no degree of nominal, intelligence and deception campaign against Iran can change or deflect attention from the realities associated with the illegal acts and irresponsible policies of the US,” read the letter.

He further rejected baseless allegations made by the US’ representative to the UN regarding Iran’s ballistic missiles and space activities, saying Iran has not conducted any activity inconsistent with paragraph 3 of annex B to resolution 2231 (2015).

“Iranian missiles have not been designed to carry nuclear warheads. US claims are hypocritical. The launching of missiles does not violate Resolution 2231,” read part of the letter.

“Instead of [showing] malicious behaviour and [committing] destabilizing acts and [making] futile efforts and baseless claims, the US should stop exporting unprecedented amounts of modern weapons to its allies, which has caused death and destruction in Yemen,” read the letter.

What follows is the full text of the letter:

The full text of Iranian envoy’s letter is as follows:

Excellency,
I am writing to you regarding the identical letters dated 29 August 2019 from the Chargé d’affaires a.i. of the United States Mission to the United Nations addressed to the Secretary-General and the President of the Security Council wherein certain baseless accusations were repeated against my country S/2019/705.

As we have stated time and again, none of Iran’s ballistic missiles are “designed to be capable of delivering nuclear weapons” and accordingly, paragraph 3 of annex B to resolution 2231 (2015) does not limit, in any way, Iran’s activities regarding the conventional ballistic missiles.

Consequently, Iran’s related activities are not inconsistent with that paragraph. Rather, they fall outside of the purview or competence of the Security Council resolution and its annexes (S/2015/550).

We continue to firmly reject the desperate attempts by the United States for the arbitrary reinterpretation of paragraph 3 of annex B to resolution 2231 (2015), including through invoking the definition of the Missile Technology Control Regime.

There is no implicit or explicit reference in that paragraph either to the Missile Technology Control Regime itself or to its definitions and, thus, any reference thereto is totally misleading. Moreover, while the Missile Technology Control Regime criteria are not legally binding, even for its 35 members, any attempt to portray them as the universally agreed definition is definitively premature.

As stated in the report of the Secretary-General (A/57/229), “there is no universally accepted norm or instrument specifically governing the development, testing, production, acquisition, transfer, deployment or use of missiles.”

Moreover, when the previous missile launches by Iran were discussed, “there was no consensus in the Security Council on how this particular launch related to resolution 2231 (2015)” (S/2017/515).

Additionally, the reference by the United States to “existing sanctions on Iran” is misleading and legally void as there are only certain restrictions, not “sanctions” within the context of resolution 2231 (2015).

In fact, when the United States, a permanent member of the Security Council, chooses to defy the Council’s resolutions repeatedly without consequence, it seriously undermines the fundamental credibility of the Council.

If unchecked, such policies and practices of the United States would further erode the credibility of the Security Council, which already faces a severe trust and confidence deficit due to such irresponsible policies of that country. Therefore, we once again call upon the international community to hold the United States accountable for its actions. In this context, we ask that the Secretary-General take actions of the United States as described in the present letter into account in his upcoming report on the implementation of resolution 2231 (2015).

I would also like to reiterate that Iran has not conducted any activity inconsistent with paragraph 3 of annex B to resolution 2231 (2015), and accordingly, it is determined to resolutely continue its activities related to ballistic missiles and space launch vehicles, both of which are its inherent rights under international law and are necessary for securing its security as well as socioeconomic interests, respectively.

At the same time, since Iran’s activities related to space launch vehicles and ballistic missiles fall outside the purview or competence of resolution 2231 (2015) and its annexes, the Secretary-General is therefore expected to seriously avoid reporting on Iran’s such activities in his next reports on the implementation of that resolution.

Seizing this opportunity, I would also like to categorically reject the allegations against Iran made by the Permanent Representative of the United States at the 8619th meeting of the Security Council on 16 September 2019 (S/PV.8619).

It has become a standard practice of certain officials of the United States who, following any incident — no matter where and by whom – without exception, immediately and without any investigation and evidence, declare Iran as the culprit. This “maximum deception” campaign is in line with and a living example of the so-called “maximum pressure” policy of the United States against Iran.

It is evident that no amount of smear campaign, disinformation and deception against Iran can change the realities about the illegal practices and irresponsible policies of the United States or distract attention away from its destructive policies, malign behavior and destabilizing measures, in particular in the Middle East. Instead of such futile attempts and baseless allegations, the United States must stop exporting an unprecedented amount of sophisticated weaponry to the Middle East, which are used including for death and destruction in Yemen by the closest regional allies of the United States.