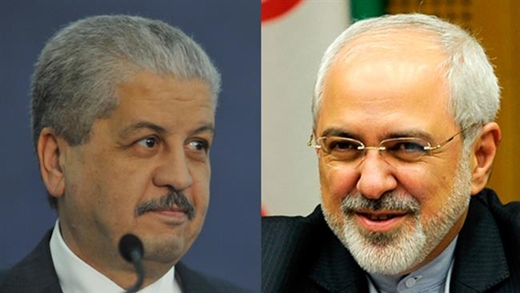 Algeria is determined to boost relations with Iran after the conclusion of the Vienna nuclear agreement, said the Algerian prime minister in a meeting with Foreign Minister Zarif.

Iranian Foreign Minister Mohammad Javad Zarif has said that the Islamic Republic is ready to hold talks with regional countries and help settle ongoing problems in the Middle East.

“There should be dialogue on regional issues between interested countries,” Zarif said in a meeting with Algerian Prime Minister Abdelmalek Sellal in Algiers on Tuesday.

He added that Iran’s contribution to dialogue among these countries is one of the Islamic Republic’s most important diplomatic efforts.

The top Iranian diplomat further pointed to the recently concluded nuclear talks between Iran and six world powers, noting that the negotiations pose no threat to any country and even serve as an “appropriate opportunity for diplomacy in the region.”

He said the nuclear talks proved that the “language of threat” cannot be used against independent and developing countries.

The Algerian premier, for his part, said his country is determined to boost relations with Iran after the conclusion of the Vienna nuclear agreement.

Sellal urged all regional countries to adopt wise measures to solve the ongoing problems in the region.

Zarif arrived in the Algerian capital on Tuesday on the second leg of a two-nation trip which also took him to Tunisia.

In an earlier meeting between Zarif and Algerian Foreign Minister Ramtane Lamamra, the two top diplomats discussed mutual relations and the latest developments in the region.