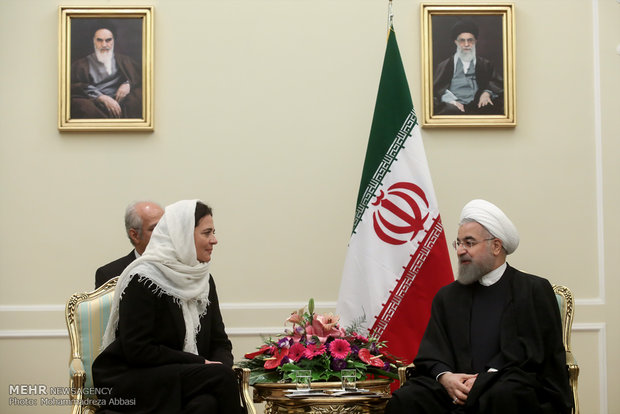 Iran’s Hassan Rouhani has said Iran’s nuclear deal with the West provided a precedent which demonstrates that global issues can be addressed thorough dialogue.

President Rouhani received Belgian Senate President Ms. Christine Defraigne on Saturday morning to discuss terrorism, the Middle East, bilateral trade, and a host of other issues. Ms. Defraigne is on a tour of Iran and has already visited other Iranian officials earlier last week.

Mr. Rouhani told the meeting that terrorism was to be addressed not through ‘bombing and retaliatory measures,’ but by ‘dialogue and diplomatic efforts,’ since to address terrorism was to address its roots. President Rouhani strongly believed that these had cultural and economic causes like frustration, inequality, poverty, and under-representation, alongside political reasons.

The President also touched on possibilities of bilateral trade with Belgium; “Iran welcomes Belgian entrepreneurs and investors after the implementation of the JCPOA,” he added. Highlighting the roles played by Parliaments and legislative branches, Rouhani emphasized that parliamentary relations would help develop bilateral relations further.

He also hailed the EU’s role in cementing JCPOA; “The deal provided a precedent according to which major global issues can be addressed diplomatically,” he told the meeting. “Current laws in under-represented communities would not fulfil the public demands in parts of the world where terrorism finds conducive grounds for growth; the EU was aloof when Iraq and Afghanistan were grappling with terrorism. Now, the fires of terrorism have reached EU borders. Paying them only lip service would not serve the fight against terrorism. Double standards in dividing terrorism into bad and good would even worsen the situation for all,” Rouhani asserted.

Rouhani believed that logistical and financial aid to terrorists should be blockaded effectively to deprive them of the resources on which they feed and nurture; “They now actively and freely provide the markets with Iraqi and Syrian antiquities which are invaluable in terms of human heritage. This issue should be addressed seriously,” he said.

For her part, Ms. Defraigne said that a new chapter of Iran-Belgian relations was on the horizon; “Brussels welcomes working with Tehran in all fields of interest; we appreciate Iran’s role and contribution in fighting terrorism, and will stand with Iran in its efforts,” she added.