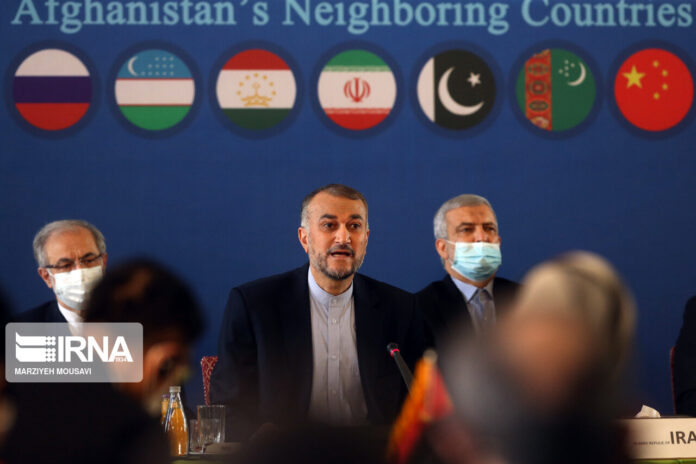 Iranian Foreign Minister Hossein Amir Abdollahian has presented Tehran’s multi-level proposal to solve the Afghanistan crisis. It included formation of an all-inclusive government, the Taliban’s responsibilities regarding security, and the distribution of humanitarian aids in the war-torn country.

Speaking in the Second Meeting of Foreign Ministers of Afghanistan’s Neighboring Countries in Tehran, Amir Abdollahian said that the meeting was the second iteration of the initiative proposed by Pakistan.

He hoped that the current edition of the meeting would outline a clearer image of the realities in Afghanistan and the expectations of the countries most impacted by the developments in that country and provide a road map for the next steps.

Amirh Abdollahian, then, presented the Islamic Republic of Iran’s proposal to find a solution to the crisis in Afghanistan.

As the first point of the proposal, he mentioned the necessity of forming an all-inclusive government effectively and sustainably representing all ethnic and religious groups via intra-Afghan dialogue without the interference of foreign actors that are highlighted by the Islamic Republic of Iran.

As the second point, Amir Abdollahian singled out the Taliban, saying that the group has undeniable duties in providing security, fighting terrorism, observing the rights of all groups including women, supplying basic needs of Afghan people, putting an end to violation of ethnic and religious groups’ rights, rooting out displacement, and observing the basic and accepted principles of international law.

On the humanitarian needs of Afghan people, including food, medicine, and COVID-19 vaccine, the top diplomat said that humanitarian aids should be distributed fairly and this requires a cohesive mechanism which the Islamic Republic of Iran proposes, as the third point, the ECO Program for Afghanistan due to calendar constraints.

He also mentioned as the fourth point of the proposal that the countries in the region should form an intelligence-security cooperation mechanism to fight organized crimes and terrorism.

The foreign minister suggested seeking the good offices of the United Nations and its mediation between Afghan parties to reach an agreement on the structure of the future government in Afghanistan.

Before presenting Iran’s proposal, Amir Abdollahian touched on the roots of the current situation in Afghanistan, saying that the crisis which has concerned all countries neighboring Afghanistan was the legacy of improper interventions by oppressive powers.

He added that the US attacked Afghanistan 20 years ago under the pretext of fighting terrorism and caused instability, war and insecurity to persist and be reproduced by its continued military presence.

Instead of moving Afghanistan and its people forward and empower them, Amir Abdollahian criticized, Washington escaped the scene in a naïve and irresponsible way and caused the situation we all are faced with today.

The foreign minister went on to say that Afghanistan’s neighboring countries are well aware of the importance of the lack of consensus inside the country, in the surrounding region, and international arena as the root of the endurance of the current crisis.

He stressed that Afghanistan’s neighbors have been largely in agreement on Afghanistan due to the depth of their understanding of the situation, urging attempts to be focused on strengthening the agreement.

The history of Afghanistan shows that whenever the interaction between different ethnic groups in the country was looked over, the peace and stability were threatened and that no mechanism would work in Afghanistan without considering social and ethnic observations, Amir Abdollahian explained.

He further named economic poverty, low per capita income, high rate of illiteracy, and lack of professional skills as the motive for individuals to join criminal and terrorist groups who have been encouraged to extend their operational cores to Afghanistan due to a lack of an across-the-board governance that can provide nation-wide security.

Referring to the terrorist attacks carried out by the Daesh in recent weeks, Amir Abdollahian maintained that everybody knew that the terrorist group has gained operations capability and geography in Afghanistan and the Taliban has failed to contain them.

Continuance of underdevelopment in Afghanistan would entail nothing but recruitment by criminal and terrorist groups and thus the expansion of terrorism in the region, he underlined.