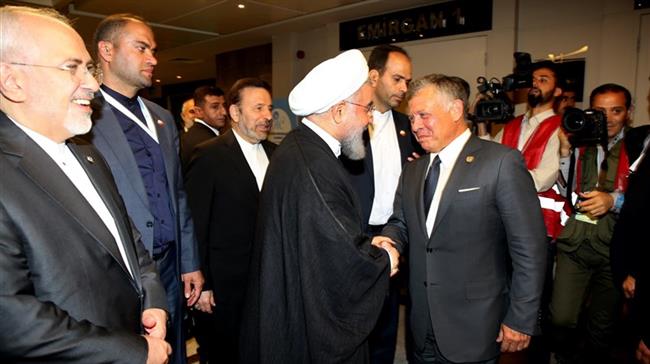 Iran's president and Jordan's king have reportedly held a brief meeting on the sidelines of a special summit of the Organization of Islamic Cooperation (OIC) in Turkey.

The short meeting between Rouhani and the Jordanian monarch was held in the Turkish city of Istanbul on Friday on the sidelines of an emergency meeting of the Organization of Islamic Cooperation (OIC) about the recent massacre of Palestinians in the Gaza Strip.

The relations between Iran and Jordan have not been cordial since the 1979 Islamic Revolution because of Jordan’s policies against Iran and its support for former Iraqi dictator Saddam Hussein during the 1980-1988 imposed war on the Islamic Republic.

The tense ties between the two countries also have their roots in Jordan’s financial and arms support for some Takfiri terrorists in Syria and some other parts of the Middle East.

Back in January, the king of Jordan accused Iran of meddling in a number of Arab countries’ affairs. He told CNN that Saudi Arabia was not the only country concerned about Iran’s “destabilizing activities, but also all states in the region, especially after we saw the repercussions of these policies in Syria, Iraq, Yemen, and Lebanon.”

In response, Iran’s Foreign Ministry Spokesman Bahram Qassemi slammed the Jordanian king’s allegations against Tehran and its regional role, saying such a stance runs counter to the realities on the ground and to the people’s call for peace and security.

“Such unfair statements cannot deny Iran’s stabilizing role and relentless efforts in the fight against terrorism and its contribution to establishing security in the region,” he said.