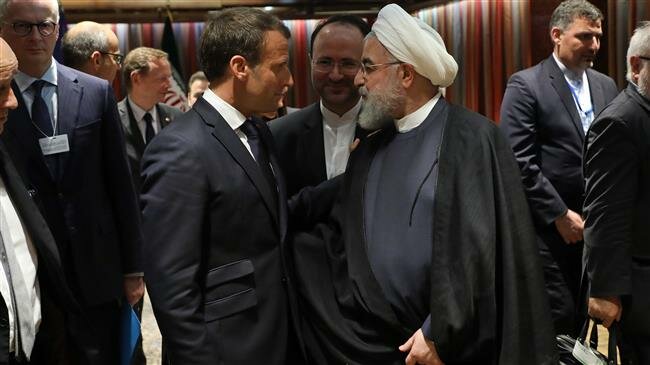 In New York, President Hassan Rouhani of Iran refused to engage in a phone conversation with his American counterpart, Donald Trump, which had been secretly arranged by French President Emmanuel Macron, leaving Trump waiting on the line, US media reports say.

The New Yorker magazine reported on Monday that Macron had tried to engineer a three-way conversation by having technicians set up a secure line in a meeting room on Rouhani’s floor at the Millennium Hilton Hotel across the road from the UN General Assembly (UNGA), on September 24 evening.

The French leader, it added, hoped that the telephone conversation would lay the groundwork for the first meeting between an American president and an Iranian president since the 1979 Islamic Revolution.

Sources familiar with last Tuesday’s events said, “The call to Trump’s line came through at 9:30. Macron took the call. But Rouhani never emerged from his room.”

“As we have been doing for several months, we worked in New York to get Iran to make new commitments and for the US, in exchange, to ease sanctions,” a French diplomat told The New Yorker. “We made technical arrangements in the event that a telephone call could take place. That call did not take place.”

Later on Monday, The New York Times confirmed the report, saying that Rouhani had left Trump hanging and Macron waiting outside his hotel suite.

“The telephone line had been secretly set up. President Trump waited on the other end. All President Hassan Rouhani of Iran had to do was come out of his hotel suite and walk into a secure room where Mr. Trump’s voice would be piped in via speaker,” it said.

According to three people with knowledge of the developments, Macron, accompanied by a small team of advisers, “awaited an answer” outside Rouhani’s suite.

“Messages were passed between them via Mr. Rouhani’s aides,” they said. “In the end, Mr. Rouhani refused even to come out of his room. Mr. Macron left empty-handed and Mr. Trump was left hanging.”

Macron has been seeking to play a mediatory role aimed at easing Washington-Tehran tensions, which have been on the rise since the US withdrawal from a 2015 multilateral nuclear deal in May 2018.

The French leader has also been leading European efforts to save the accord, whose fate remains in doubt since Washington’s exit.

Iran has repeatedly rejected Trump’s offer of talks, saying it would not engage in such negotiations unless the US returns to the deal and lifts its unilateral sanctions.

Tehran says negotiations with Washington would be possible within the framework of the P5+1, comprising the US, France, Britain, Russia, China plus Germany, which successfully negotiated the deal with Iran, if Washington meets those conditions.

In a speech at the General Assembly on Wednesday, Rouhani reaffirmed Iran’s position and said he was not interested in a “memento photo” with Trump on the sidelines of the UN meetings, while the US was piling economic pressure on Iran.

“Memento photos are the final stage of negotiations, not the first one,” Rouhani told the world body.

In 2013, Rouhani and then US president Barack Obama held a telephone conversation as the Iranian president was wrapping up his visit to New York for the 68th annual session of the UNGA, as diplomatic efforts were underway between the two sides within the P5+1 format in the run-up to the nuclear deal.

The New York Times cited Cliff Kupchan, chairman of the Eurasia Group, a political-risk consulting firm in Washington, as saying that Trump’s desire for negotiations with Iran was meant to “flip the news cycle” from the Ukraine scandal.

“Trump really wants a foreign policy win and can’t find one,” he said. “He thinks talks with Iran now may be his best shot.”

Trump “was especially desperate at the UNGA — he wanted to flip the news cycle from Ukraine and Biden to a dramatic meeting with Rouhani,” he added.

The US president is facing an impeachment inquiry related to allegations that he pressured Ukraine to smear his top Democratic political rival Joe Biden.