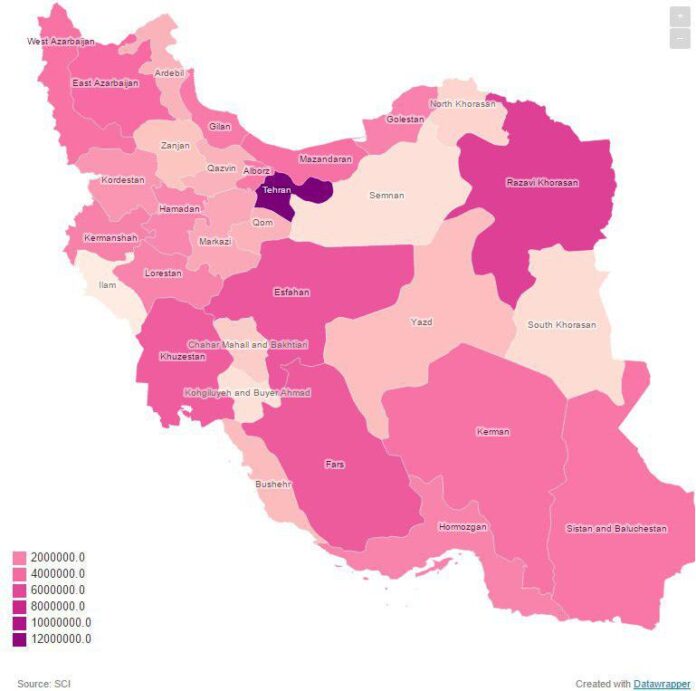 The findings of the recent National Population and Housing Census show Iran’s population is over 79.92 million, which is about 4.77 million more compared to the previous figure registered by the census conducted in the Iranian year 1390

The findings of the recent National Population and Housing Census show Iran’s population is over 79.92 million, which is about 4.77 million more compared to the previous figure registered by the census conducted in the Iranian year 1390 (March 2011-12).

Parsa noted that the number of households in urban and rural areas has increased by 2,697,640 and 312.748 over the same period of the previous year respectively.

“At present, an average of 3.3 people lives in each Iranian household. The figure for urban and rural areas is 3.3 and 3.4 respectively. This shows a decrease compared with five years ago when the number of people per household reached 3.5 for urban and 3.7 for rural areas,” he said.

“The population of those employed in all economic sectors, except for construction, increased to 22.7 million [compared to the previous year]. Men’s and women’s unemployment rates stood at 10.5% and 20.7% respectively,” he said.

The latest national census was carried out nationwide from September 24, 2016, in two stages of online and door-to-door registration, Mehr News Agency reported.

The door-to-door phase, which was the second phase, ended on November 18.

The online registration, in which 11.1 million households—almost 37.2 million people accounting for 46.4% of the population participated, began on September 24 and ended on October 21.

The Statistical Center of Iran is the official body in charge of providing data on population, agriculture, manufacturing, trade and economy of Iran.

The population and housing census used to be conducted once a decade in Iran, as stipulated by national legislation between 1956 and 2006. The first such census was completed by the Bureau of General Statistics in 1956; subsequent censuses were conducted by SCI in 1966, 1976, 1986, 1996 and 2006.

The Cabinet adopted a legislation in 2007 whereby the interval for population and housing census was reduced from 10 years to five.

The 2011 census was the seventh and the latest National Population and Housing Census of the country.