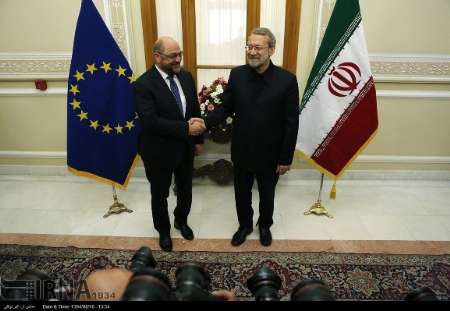 Iran plays a key role in the settlement of the Syrian crisis, Martin Schultz said in a joint press conference with Ali Larijani in Tehran.

The EP president said, “Iran-Europe relations are at a crucial stage,” adding Larijani played a pivotal role in nuclear talks between Iran and P5+1.

Schultz went on to say, “The two sides are keen on expanding joint interests.”

Touching on the Syrian issue, he said that Iran plays a key role in the settlement of crisis in the Arab country.

Schulz who arrived in Tehran on Saturday to discuss stepping-up dialogue between the EU and Iran is to meet with President Rouhani as well as Foreign Minister Mohammad Javad Zarif.