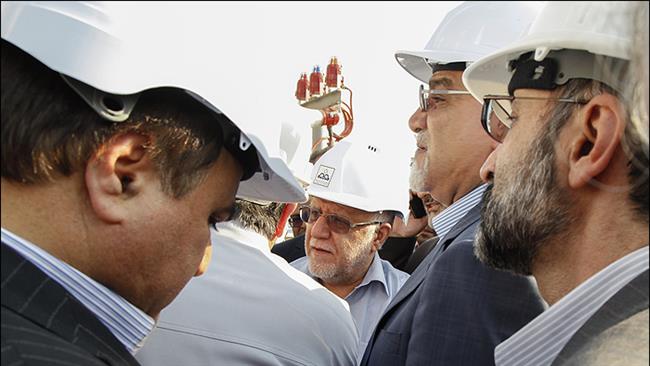 Iran has sharply raised oil exports since the lifting of sanctions in January, with the sales of crude and condensate standing over 2 million barrels per day, Minister of Petroleum Bijan Zangeneh says.

“Iran’s exports of oil and gas condensate are now at more than 2 million barrels per day,” the minister told the Shana news agency in Tehran on Sunday.

Condensate is a light oil that is typically produced in association with natural gas.

The Islamic Republic exported about 1 million bpd of oil under sanctions. Since the lifting of those restrictions, the country has been ramping up production in a bid to regain its market share.

The oil market is saturated amid oversupply by major producers such as Saudi Arabia.

The kingdom is currently pushing for a production freeze provided that other oil producing nations stop their output at current rates.

On Friday, deputy crown prince Mohammed bin Salman said Saudi Arabia would only freeze its oil output if Iran and other major producers did so.

Zangeneh has said Iran would take part in discussions on a possible production freeze after its output reached 4 million barrels per day.

The minister had already dismissed the idea of a production freeze by Iran as “a joke.”

“We do not intend to sanction ourselves again after coming out of the sanctions,” Deputy Petroleum Minister Amir Hossein Zamani said in February.

With Iran under sanctions, Saudi Arabia raised its output to an all-time high of more than 10.5 million barrels a day as did other producers, leading to an oversupply which has caused prices to nosedive around 70% since mid-2014.

Bin Salman’s remarks on Friday left the outcome of a meeting between OPEC and other big oil producers in Doha this month in question and sent prices sharply down.