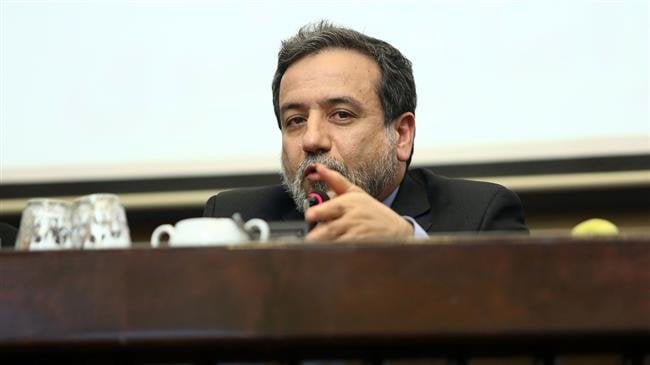 “I really think that some people are pulling Netanyahu’s leg,” Araqchi told IRIB in a short interview on Friday.

2) For Farsi speakers, “Turquzabad” is a term equivalent to “John Doe” or “Main Street” or “NoWhereLand” in English, which are terms that carry no real semantic information. Among Iranians, it is often used in a derisive way in a comical context.

People are taking selfies in front of the carpet cleaning center in #Turquzabad which @netanyahu claimed is a ‘secret atomic warehouse’! pic.twitter.com/neeQz7qzZN

During his speech on Thursday at the 73rd annual session of the UN General Assembly in New York, the Israeli prime minister used a map and photographs of a building that he claimed was a “secret atomic weapons warehouse” in the Iranian capital, Tehran.

Shortly after Netanyahu’s speech, Iranian Foreign Minister Mohammad Javad Zarif lashed out at the Israeli premier for his baseless claims against Iran, saying Tel Aviv is in no position to level such accusations against Tehran.

“Netanyahu must explain how Israel, as the only possessor of nuclear weapons in the Middle East region, can put itself in a position to level such brazen accusations against a country whose [nuclear] program has been repeatedly declared peaceful by the International Atomic Energy Agency (IAEA),” Zarif told IRNA.

Iran has repeatedly announced that its nuclear program is merely for peaceful purposes and poses no threat to the international peace and security.

Back in June, the Iranian foreign minister decried Israel’s nukes as a real threat to the Middle East region and the rest of the world, calling for a new focus on the occupying regime’s nuclear arsenal.

In a post on his official Twitter account, Zarif said although Iran had no nuclear weapons, Israel, which is the sole Middle Eastern country to possess such weapons, continued to “howl” about “fabricated” Iranian “ambitions.”