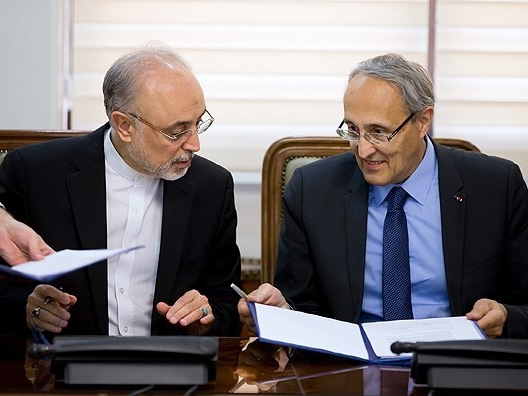 It would generate energy through nuclear fusion, rather than the fission process currently used in nuclear power stations around the world. Fusion could prove cleaner, safer and more efficient, according to Reuters.

“Under the document, the two sides agreed to keep confidential each other’s information during their cooperation,” said Salehi.

Salehi, a nuclear physicist, also said a second agreement has already been drafted which details bilateral cooperation between the two sides which will be signed in the near future.

“We hope to sign the agreement in the near future,” he added.

Earlier in July, Salehi visited the ITER headquarters in southern France, saying there was “general agreement” for cooperation on the ITER.

While details of the future cooperation document are unknown, a full membership to the project should not be the case, as Bigot told Reuters in an interview in July.

“After that they told us they had a long-standing interest in fusion and they would like to consider how to join the ITER project, but clearly not as a full member,” he said.

“They felt that full membership is not best for them, but consider association in some specific areas or fields where they can contribute. Now it’s up to them to make up their mind,” Bigot said.

Bigot’s July comments, however, are thrown into doubt by Salehi who said Iran will enter into all-encompassing cooperation on the project.

“The project is an executive, technical, and scientific one which demands extensive scientific activity. That is why we enter into an all-encompassing cooperation,” he added.

Iran’s participation in the project is an outcome of the nuclear deal it concluded with six world powers in July 2015, formally known as the Joint Comprehensive Plan of Action.

Under the deal, EU and E3+3 countries and international participants will engage in joint projects with Iran, including through IAEA technical cooperation projects, in the field of peaceful nuclear technology, including nuclear power plants, research reactors, fuel fabrication, agreed joint advanced R&D such as fusion.