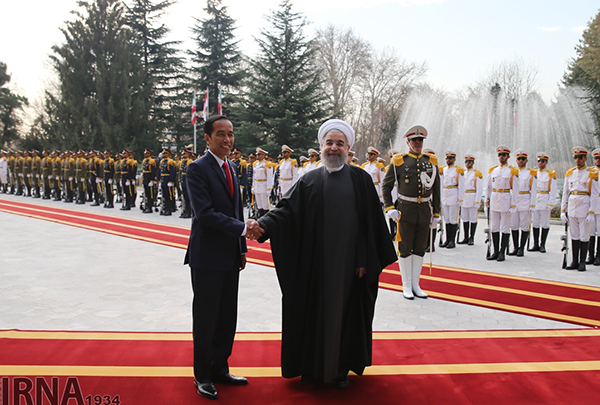 President Hassan Rouhani says cooperation between Iran and Indonesia can contribute to the security of the region and the Muslim world in general.

Rouhani made the remarks on Wednesday in Tehran at a joint press conference with his visiting Indonesian counterpar, Joko Widodo, after holding a bilateral meeting. The visit by the Indonesian leader, who is in the Iranian capital at the head of a delegation, was also preceded by a joint business event.

“I am in no doubt that this cooperation will benefit stability and security in the region and the Muslim world,” said the Iraniani

The Iranian chief executive said the bilateral ties have witnessed improvement since his 2015 visit to the Southeast Asian nation, and following the conclusion that year of a nuclear agreement between Tehran and six world powers.

Rouhani further said Iran will be providing Indonesia with crude oil, liquid gas and petrochemicals among other products, adding that Tehran and Jakarta have agreed that mutual trade take place directly, forgoing any third party.

The Indonesian president, in turn, described his trip to Tehran as a new chapter in Tehran-Jakarta relations, saying his talks earlier in the day focused on the promotion of bilateral ties in different areas, including energy and economy.

The visit also saw the signing of four cooperation agreements in the areas of reciprocal legal assistance in penal affairs, extradition of criminals to their respective countries, electricity and renewable energies, and promotion of mutual investment.

Also during the trip, the two sides agreed to cooperate in efforts to resolve the problems currently facing different parts of the Muslim world, including Yemen, Syria, and Myanmar.

An Indonesian delegation would be travelling to Tehran in less than two months to follow up execution of the signed documents.