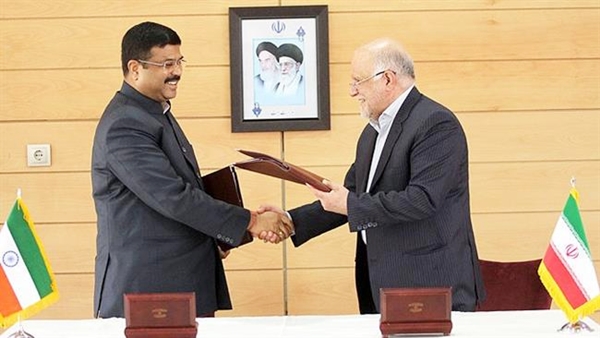 Iran and India have signed an agreement to boost oil and energy cooperation.

The document was signed by Iran’s Minister of Petroleum Bijan Zangeneh and his visiting Indian counterpart Dharmendra Pradhan in Tehran on Saturday.

The development of the giant Farzad-B gas field, export of Iran’s crude and oil products to India, and enhanced cooperation in the fields of petrochemical industry are among the main provisions of the agreement.

The Farzad-B field in the offshore Farsi block is estimated to hold 12.8 trillion cubic feet of in-place gas reserves.

Speaking to reporters following a meeting with Pradhan in Tehran on Saturday, Zangeneh said Iran is currently exporting around 350,000 barrels of crude oil a day to India.

“We hope that this number will increase after the removal of sanctions [in January],” the Iranian minister added.

He noted that the development of Farzad-B natural gas field was the main issue discussed by the two ministers, saying, “The Iranian and Indian sides are set to reach an agreement on the timeframe of the project which is a difficult and time-consuming task.”

The Indian oil minister arrived in Tehran on Saturday to hold talks with Iranian officials on ways to expand cooperation in different sectors of oil industry.

Iran is targeting India, where demand for crude is growing faster than other Asian countries, as well as old partners in Europe for stepped-up shipment of its crude oil following the lifting of the US-led sanctions against it.

Indian refiners have said they are keen to import more from Iran, as demand for fuel soars at a rate faster than that in China.