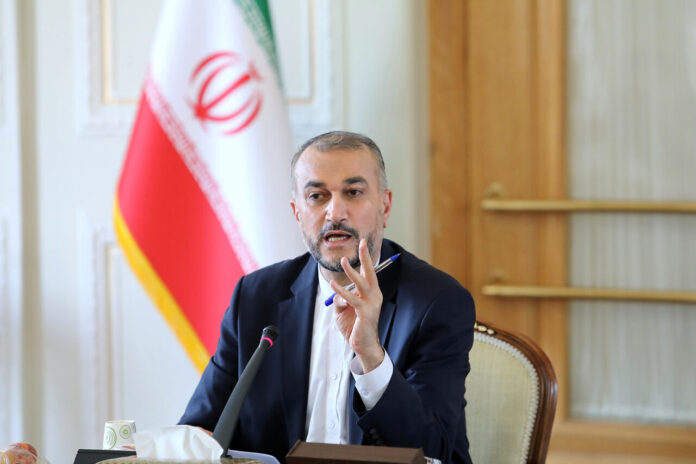 Iran’s Foreign Minister Hossein Amir Abdollahian has stated US President Joe Biden can issue an executive order so that Washington could promptly return to the nuclear deal, officially known as the Joint Comprehensive Plan of Action (JCPOA).

On Sunday, Iran Newspaper interviewed Amir Abdollahian on the nuclear talks following his return to Tehran from his regional trips to Russia, Lebanon, and Syria.

The foreign minister underlined that the diplomatic apparatus of the Islamic Republic will not tie the fate of the country and the Iranian people to the 2015 nuclear deal or any foreign state, because common interests are considered as criteria of interactions.

The Iranian top diplomat stated that Tehran has drawn a sublime mechanism to pursue implementation of the regional cooperation motto, adding that the Islamic Republic will stand against the United States’ Iranophobic propaganda campaign.

According to the foreign minister, the lifting of anti-Iran sanctions will bring about positive impacts, so the speculations that the new Iranian negotiating team would follow up a way that would lead to a standstill have nothing to do with realities on the ground.

He went on to say that the administration of President Ebrahim Raisi outlined some keywords for its foreign policy, including a balanced foreign policy as well as an active, intelligent and dynamic diplomacy.

The Islamic Republic attaches importance to relations with neighboring states and countries in Asia, he underscored, noting that Tehran will pursue a dynamic diplomacy, when it comes to Europe. He stressed that Latin America and Africa will not be forgotten.

As to balance, he mentioned that the 13th administration in Tehran is keen on maintaining balance in its relations with the East and the West, emphasizing that the Islamic Republic will not tie all of its foreign policy issues to China and Russia, while it will prioritize Asia-oriented foreign policy.

The Islamic Republic is committed to its slogan of “No East, No West” to maintain independence, when it comes to dealing with foreign powers, he noted.

The top diplomat also said that returning to the nuclear deal needs serious determination among American authorities; President Biden can issue an executive order to return to the point that his predecessor Donald Trump withdrew from the international agreement.

The problem here is that Biden pretends that he is against his predecessor’s foreign policies, because when it comes to Iran the US president pursues the same policies that Trump had, the Iranian foreign minister argued.

Iran plans to come back to the negotiating table, but the Iranian officials are weighing the ways they can restart talks on the revival of the nuclear accord, he continued.

Amir Abdollahian further noted that Iran’s economic development should not be tied to nuclear negotiations and the JCPOA, so the country requires other channels to nullify negative impacts of the US’s sanctions.