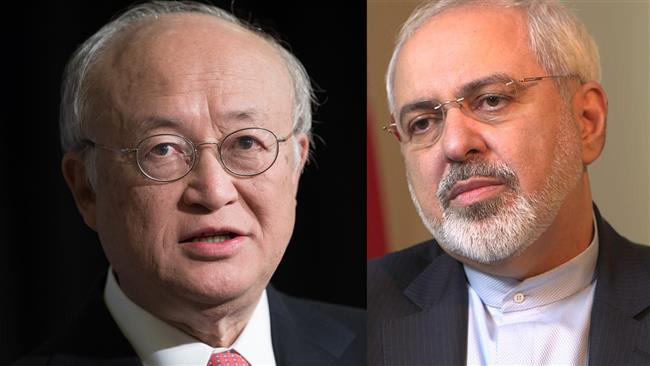 Iran’s Foreign Minister Mohammad Javad Zarif has called for the timely implementation of a nuclear agreement reached between Iran and six world powers.

Zarif, who is in New York to attend the 70th annual session of the UN General Assembly, held a meeting with Director General of the International Atomic Energy Agency (IAEA) Yukiya Amano on Friday.

He also expressed hope that clarification of outstanding issues would help Iran and the UN nuclear agency implement the Joint Comprehensive Plan of Action (JCPOA), reached between Tehran and the P5+1, in a new atmosphere.

Zarif thanked Amano’s efforts to implement a road map signed between Iran and the IAEA in July for Tehran’s civilian nuclear program.

On July 14, Iran and the IAEA signed a road map regarding the Islamic Republic’s nuclear work in the Austrian capital of Vienna. The agreement was clinched on the same day Iran and the P5+1 – the United States, France, Britain, Russia, China and Germany – finalized the text of the JCPOA in Vienna.

Amano, for his part, expressed the IAEA’s readiness to continue cooperating with Iran, particularly on the road map, in a positive atmosphere.

The IAEA chief paid a day-long visit to Tehran on September 20 and held talks with senior Iranian officials over the implementation of the road map.

As part of the road map, the IAEA is required to finish its investigations into Iran’s nuclear activities and submit a report to the agency’s Board of Governors by December 15.

Zarif and Mogherini discussed new rounds of talks between Iran and the EU.

The Iranian foreign minister said on July 28 that Tehran and the EU have agreed to revive stalled talks.

Speaking at a joint press conference with Mogherini in Tehran, Zarif said Iran-EU “high-level” talks are to resume in the “near future.”