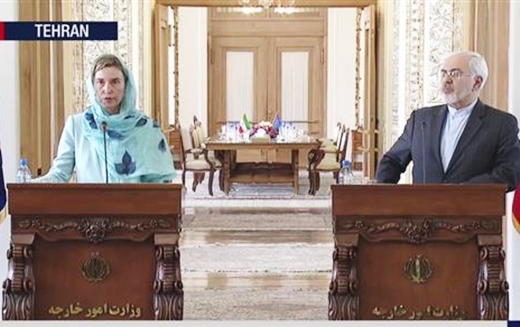 Iran and the European Union have underscored their determination to promote their bilateral relations in various areas, particularly economy, as well as cooperation on other issues of international importance.

“We do not see the missile tests as a breach of the JCPOA,” she said on Saturday during a joint press conference with Iranian Foreign Minister Mohammad Javad Zarif in Tehran.

She was referring to the Joint Comprehensive Plan of Action, the nuclear agreement reached between Iran and the P5+1 states — Russia, China, France, Britain, the US and Germany — in Vienna last July.

Mogherini, however, said “this doesn’t mean that we are not concerned.”

A day earlier, the country’s Armed Forces fired another ballistic missile called Qiam from silo-based launchers in different locations across the country.

The US claims that Iran’s missile tests violate the UN Security Council Resolution 2231 that endorsed the JCPOA.

Zarif, in turn, told the presser that Iran’s missile tests neither breach the JCPOA nor any United Nations Security Council resolutions as the missiles “are not designed to carry nuclear weapons.”

Elsewhere in the press conference, the two sides underscored their determination to promote Iran-EU bilateral relations in various areas, particularly economy, as well as cooperation on other issues of international importance.

Zarif said Mogherini’s trip to Tehran could be a “new beginning” in ties between Tehran and the 28-nation bloc.

“Today is the serious beginning in the relations between Iran and the European Union and we hope that this cooperation leads to common interests, progress and international development for the people of Iran and EU,” Zarif said.

He said economic and financial cooperation as well as the opening of a permanent EU office in Tehran is on the agenda of talks, adding that four statements are to be issued at the end of the discussions.

Referring to last July’s nuclear agreement, Zarif said Tehran and the EU “will cooperate to remove the remaining obstacles in the way of the JCPOA’s implementation.”

“We are certain that the EU’s political and economic interests lie in implementation of the Joint Comprehensive Plan of Action and cooperation with Iran,” the Iranian foreign minister said.

The top EU diplomat, for her part, said her visit to Tehran is focused on a broad spectrum of topics from the expansion of bilateral ties to regional issues.

She further hailed the nuclear deal reached between Iran and the P5+1 states adding that the JCPOA proved “diplomacy works.”

“Iran has delivered on its side of the deal and so has the EU by lifting the sanctions,” the EU official said.

The EU official further said the 28-nation bloc will support the Iranian bid to join the World Trade Organization.

Mogherini has traveled to the Iranian capital on a one-day visit at the head of a high-ranking political and economic delegation comprising seven European commissioners.