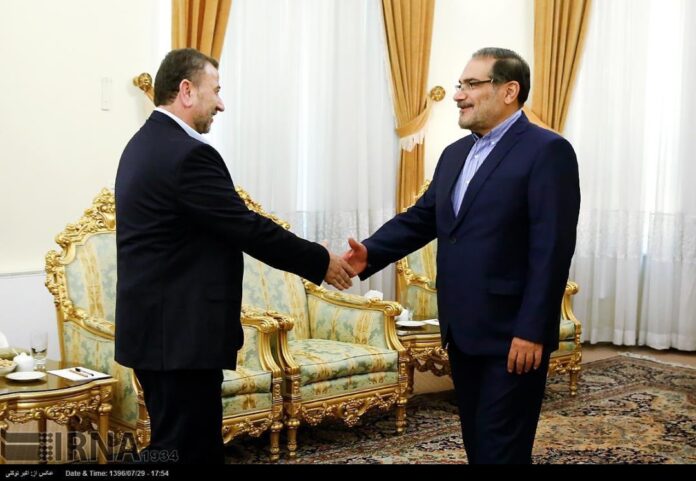 A top Iranian official says fighting the Israeli regime is an unchangeable policy of the resistance front, and the Islamic Republic will always back those fighting for the liberation of Palestine.

In the meeting, the two sides discussed the latest developments regarding Palestinians’ resistance against the Israeli regime.

Shamkhani welcomed the recent election at the Political Bureau of Hamas, and said the trend indicates the existence of democracy and dynamism on the revolutionary path of this popular institution.

He stressed that Iran has, within the framework of its revolutionary and Islamic approach, always stood up for the cause of Palestine and supports figures who are hardworking and steadfast as ever in achieving the goal of fully liberating occupied Palestine.

He said fighting incessantly against the Israeli regime is a major policy and unchangeable strategy of the resistance front.

He expressed hope that Hamas, as a leading institution in the axis of resistance, will maintain its status in fighting the occupation of the Israeli regime while maintaining its revolutionary approach.

Shamkhani expressed regret over the un-Islamic and inhumane actions by Takfiri groups and certain countries supporting them in the region, which has tarnished the brilliant image of Islam.

“Any move that would see the issue of Palestine lose its status as the number-one priority of the Muslim world, or would contribute to the compromise process or disregard for the rights of Palestinians, is considered as a betrayal of all Muslims and unforgivable,” he said.

Shamkhani urged the Muslim world to build a consensus again to realize its potential to support and defend Muslim Palestinians.

“The mass congregation of Arba’een, given its humane and anti-tyranny theme, can turn into the most important gathering of the world’s freedom-seekers against the Zionist regime [of Israel]” he said.

“The US and the Zionist regime [of Israel] feel threatened by the change of balance in the region in the interest of the people and governments involved in the war on terrorism, and seek to restrict the battle against terrorism by resorting to hollow pretexts such as blocking Iran’s influence in the region,” said Sahmkhani.

He then referred to the strategic influence of Iran’s contribution to the war on terrorism at the request of Iraqi and Syrian governments.

“The accusations and lies of the United States and the media outlets run by the hegemony system against the people in the region, who have gotten rid of the danger of terrorism and who consider Iran as their supporter against Takfiri groups, are worthless,” he said.

Al-Arouri, in turn, said he was pleased to be in Iran and meeting with the country’s top officials.

“In my first foreign trip after being chosen as the deputy head of the Hamas Political Bureau, I have come to Iran to both express my gratitude to the Islamic Republic of Iran for its determining support for Palestinian Muslims and to stress Hamas leaders’ determination to further enhance their cooperation with Iran.”

He referred to Imam Hussein (the third Shiite Imam of the Prophet Mohammad’s infallible Household) as the leader of the world’s freedom-seekers and those fighting tyrants.

“The issue of Palestine is a cause which goes beyond the Muslim world and all freedom-seekers around the world are pursuing the holy objective of extricating Palestinians from suffering and oppression.”

He condemned the inhumane and violent acts by Takfiri groups which, in the name of Islam, have done the most harm to the Muslim community and the brilliant face of this divine faith.

“Such actions will not only sideline the rightful struggles of the oppressed Palestinian people, but will definitely serve to achieve the objectives of the US, the Zionist regime and their supporters,” he said.