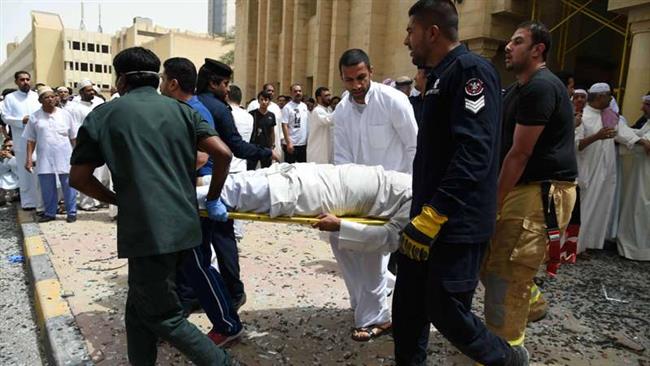 Foreign Ministry Spokeswoman Marzieh Afkham on Friday strongly condemned the terrorist attack on a Shiite mosque in the Kuwaiti capital, and reiterated that “Takfiri terrorism is the most significant menace to regional nations.”

At least 25 people were killed and over 200 others injured in the bombing that was carried out during the weekly Friday prayers at Imam Sadeq Mosque in Kuwait City.

Regarding the raid in Tunisia, the Iranian official said such terrorist acts are aimed at tarnishing the image of Islam and destabilizing Islamic countries and the region.

She also called for collective and urgent measures to eradicate terrorism and counter extremist groups.

At least 37 people were also killed in an attack by two unidentified gunmen in the Port El Kantaoui tourist complex, 10 kilometers (6.2 miles) north of the town of Sousse in Tunisia. An exchange of gunfire was reported between the attackers and security forces.

One of the gunmen is said to be killed and the other remains at large.

The ISIL terrorist group has claimed responsibility for both attacks.

Afkham also condemned a deadly attack in France, saying that such terrorist measures are not compatible with the teachings of Islam.

A truck driver, reportedly carrying a flag of the ISIL Takfiri group, crashed into a gas factory located in the small town of Saint-Quentin-Fallavier, about 40 kilometers (25 miles) from the city of Lyon, and hung his employer’s severed head on a factory gate.

The Friday terror raids have triggered strong reactions and criticisms from various world leaders and bodies.

UN Secretary General Ban Ki-moon slammed the “appalling” attacks in France, Kuwait and Tunisia, saying that those responsible should be brought to justice.

The White House also denounced the “heinous attacks” in the three countries.

Many Islamic bodies and organizations, including the Lebanese resistance movement Hezbollah, Egypt’s top Muslim authority al-Azhar, and the Houthi Ansarullah movement of Yemen, also censured the act of terror in Kuwait.

“No country is without risk, we have raised the level of alert to re-sensitize those units charged with protecting sensitive places,” Italian Interior Minister Angelino Alfano said on Friday, without specifying to what grade he had increased the level.

Spain’s Interior Minister Jorge Fernandez Diaz also said he had decided to raise the terror alert level from medium to high over security concerns about potential attacks on Spanish soil.