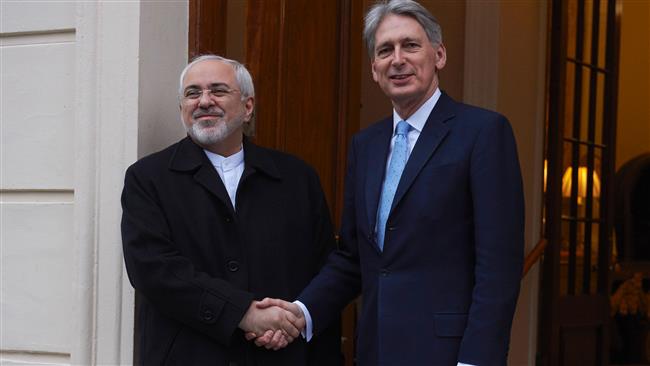 Zarif made the remarks while speaking to reporters in London on Friday after a 1.5-hour meeting with Britain’s Foreign Secretary Philip Hammond on the sidelines of a donor conference on Syria.

“In the meeting, we agreed that the two countries start issuing visa for ordinary citizens and ordinary passports within weeks,” the Iranian minister said.

“We believe that this measure is a positive move for further exchanges between the two countries’ people and we hope that it will be conducive to a better mutual understanding,” he added.

On August 23, 2015, the British foreign secretary attended a symbolic ceremony marking the reopening of the UK embassy in Tehran.

Britain shut down its embassy in Tehran in November 2011 and withdrew its diplomatic staff after hundreds of Iranian students staged a protest outside the UK embassy in Tehran against the expansion of London sanctions on the Islamic Republic, pulling down the UK flag and demanding the expulsion of the British ambassador.

Nearly two years after their diplomatic ties were severed, Iran and Britain agreed in October 2013 to appoint non-resident chargés d’affaires as a first step toward reopening embassies.

Also in his remarks, the Iranian foreign minister said he raised bilateral cooperation in banking, economic and investment sectors as well as regional issues with his British counterpart.