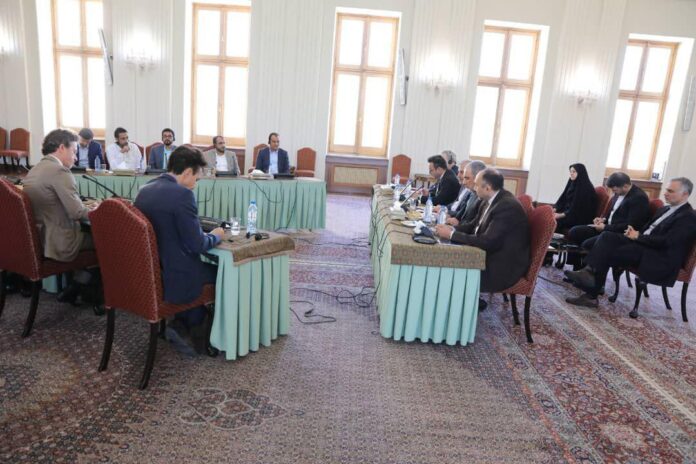 Representatives of Iran, the Yemeni Houthi Ansarullah Movement, and four European countries have held a trilateral meeting in Tehran on the latest developments in the war-torn Arab country.

The meeting was held at the Iranian Foreign Ministry’s building within the framework of Iran’s international consultations to settle the Yemen crisis in a political way.

The talks were attended by Ali-Asghar Khaji, a senior assistant to Iran’s Foreign Minister in special political affairs, a delegation from Yemen’s Ansarullah Movement headed by the group’s spokesman Mohammed Abdul-Salam, and the ambassadors and heads of missions of the four European Union countries known as the EU/E4 (Britain, France, Germany, and Italy).

During the meeting, the participating delegations elaborated on their respective countries’ views regarding the Yemen developments, including the political and humanitarian issues and the developments on the ground.

They also expressed deep regret over the continuation of critical situation in the Arab country, which has resulted in the killings and injuries of tens of thousands of Yemenis and the destruction of the country’s infrastructures.

At the end of the meeting, the participating delegations underlined the necessity for ending the war as soon as possible, and called for political solutions as the ultimate way to resolve the Yemen crisis.

They further voiced concern over the humanitarian situation in Yemen, urging expedited delivery of humanitarian aid to the people.

The delegations also called for the full implementation of Stockholm agreements, and that all parties live up to all their commitments, describing it as a prelude to the final settlement of the political crisis in the Arab state.

The Yemeni delegation, headed by Abdul-Salam, arrived in Tehran a few days ago, and has since held talks with top Iranian officials including Leader of the Islamic Revolution Ayatollah Seyyed Ali Khamenei and Foreign Minister Mohammad Javad Zarif.

In the meeting with Ayatollah Khamenei, Abdul-Salam praised Tehran over its support for the Yemeni nation, equating Iran’s backing for the world’s oppressed people, especially Yemenis, with “a religious and ideological position.”

The Yemenis are confronting a war being waged by as many as 17 nations, Abdul-Salam said, pledging that the nation’s resistance and steadfastness in the face of the oppressors will last until “complete victory.”

Saudi Arabia and a number of its regional allies launched a devastating campaign against Yemen in March 2015, with the goal of bringing the government of former president, Abd Rabbuh Mansur Hadi, back to power and crushing Ansarullah.

A number of Western countries, the US, France and Britain in particular, are also accused of being complicit in the ongoing aggression as they supply the Riyadh regime with advanced weapons and military equipment as well as logistical and intelligence assistance.