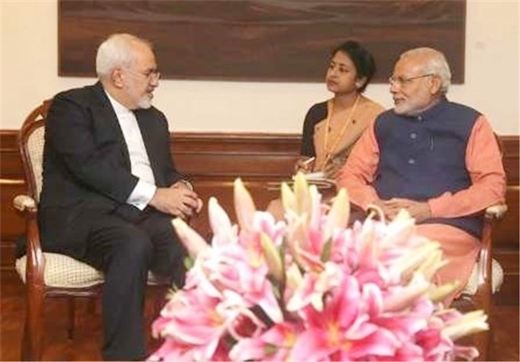 The Indian prime minister called for the immediate establishment of a joint commission for the expansion of bilateral relations in his meeting with Foreign Minister Zarif.

In a meeting with Iranian Foreign Minister Mohammad Javad Zarif in New Delhi on Friday, Modi said he has prepared all Indian officials for a new round of relations with Iran.

The Indian premier said he was impressed by the Iranian President Hassan Rouhani’s “positive and constructive” stances in a July summit in the Russian city of Ufa.

Modi said he has felt President Rouhani’s seriousness about enhancement of Iran-India relations.

The Indian prime minister also called for the immediate establishment of a joint commission for the expansion of bilateral relations.

Highlighting the two countries’ similar views on Afghanistan, Iraq and other regional developments, Modi stressed the need for continued consultation between Iran and India to secure regional peace and stability.

He said Tehran and New Delhi can promote cooperation on a railroad linking Iran to Central Asia and on to the International North-South Transport Corridor (NSTC).

The Iranian foreign minister, for his part, warned of the threats posed by the ISIL (the Islamic State in Iraq and the Levant) Takfiri terrorist group as well as extremism and violence, urging collective efforts to battle these menaces.

Countering these evil scourges requires global determination and cooperation among different countries, he said, adding that Iran has always played a constructive role in regional developments and sought to safeguard the security of the region.

His trips came in the wake of the conclusion of nuclear talks between Tehran and P5+1 (Russia, China, the US, Britain, France and Germany).

Iran and the six powers on July 14 finalized the text of a lasting nuclear deal that would terminate all anti-Iran sanctions after taking effect. The United Nations Security Council also unanimously passed a resolution afterward, endorsing the comprehensive accord.