The International Atomic Energy Agency (IAEA) has once again confirmed that Iran has been living up to its commitments under the 2015 landmark nuclear agreement it signed with the P5+1 group of countries.

Iran’s stock of low-enriched uranium as of May 27 was 79.8 kilograms, well below the agreed limit of 300 kilograms, the IAEA said in a confidential report on Friday.

It added that the level of uranium enrichment did not exceed a 3.67 percent cap – well under the maximum five percent regarded as suitable for civilian energy uses.

The new IAEA report, the second since the January inauguration of US President Donald Trump, was sent to the member states amid increasing tensions between Tehran and Washington. Trump has called the nuclear agreement, known as the Joint Comprehensive Plan of Action (JCPOA), “the worst deal ever negotiated” and vowed to “dismantle” the “disastrous” deal.

According to the quarterly assessment, Iran’s stock of heavy water, a chemical used as a moderator in a type of nuclear reactor that can produce plutonium, was 128.2 tonnes on May 16. Under the JCPOA, Tehran has agreed to keep its heavy water stockpile below 130 metric tonnes.

The UN nuclear agency, in its quarterly report in February, the first since President Trump’s inauguration, said the Islamic Republic has stockpiled roughly half of the enriched uranium allowed under the JCPOA. 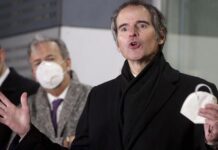