An Iranian woman, who has travelled to the hottest and coldest places on the Earth, says despite their radical climate differences, the two locations are strikingly similar.

Sogol Khalkhalian, a young Iranian woman who has visited both the hottest – Loot Desert in Iran – and coldest – South Pole in Antarctica – places on the Earth, has mounted an exhibition, opened on May 8, of the photos she has taken from the two regions to put on display the striking similarity of nature in the ice-covered South Pole and the sand dunes in the Iranian desert.

Commenting on her trips to the South Pole and Loot Desert in a Farsi interview with the Khabar Online, she said her strong interest in snow and cold weather had motivated her to take a trip to the North Pole where she found the opportunity to see pictures and films taken by her fellow travellers of the South Pole and was greatly encouraged to travel to the attractive region in the southernmost point on the Earth. 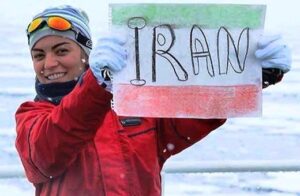 “The films and photos strongly aroused my curiosity about the continent. Heading to the South Pole, I started my journey from the UAE by taking a flight to the Argentinean capital of Buenos Aires. From there, I headed to Ushuaia [which is a resort town in Argentina located on the Tierra del Fuego archipelago, the southernmost tip of South America, and is nicknamed the “End of the World”]. Ushuaia is the closest city to the South Pole. From there, I, along with my companions, set out on our 15-day-long journey to the South Pole by ship.”

Khalkhalian stressed that the peace and tranquillity found in the South Pole is indescribable, adding the fantastic continent, where nobody lives, was discovered 200 years ago.

“Except for penguins, no other living creature dwells the entire continent. Upon entering the pristine region, I felt like I was in another planet. No modern communication facilities are accessible there. Even one cannot find another person to have a conversation with. Very few people travel to that place. Having no fear of being hunted, animals approached us and strolled within a very short distance of us. Even whales approached our ship and swam in a relaxed mood around us. Having seen the peaceful behaviour and manner of the whales, I felt deeply sorry that human beings used take advantage of these mammals’ peacefulness and friendliness and hunted them to burn them in huge furnaces to use their fat.

Commenting on the issue of global warming and its impact on the South Pole, she said, “I had heard a lot about the rising temperature of the Earth. However, I understood the depth of the disaster for the first time, in my trip to the North Pole where I saw scattered large masses of ice floating in the sea. There, I realized the issue is much more serious than what it sounds in the news.” 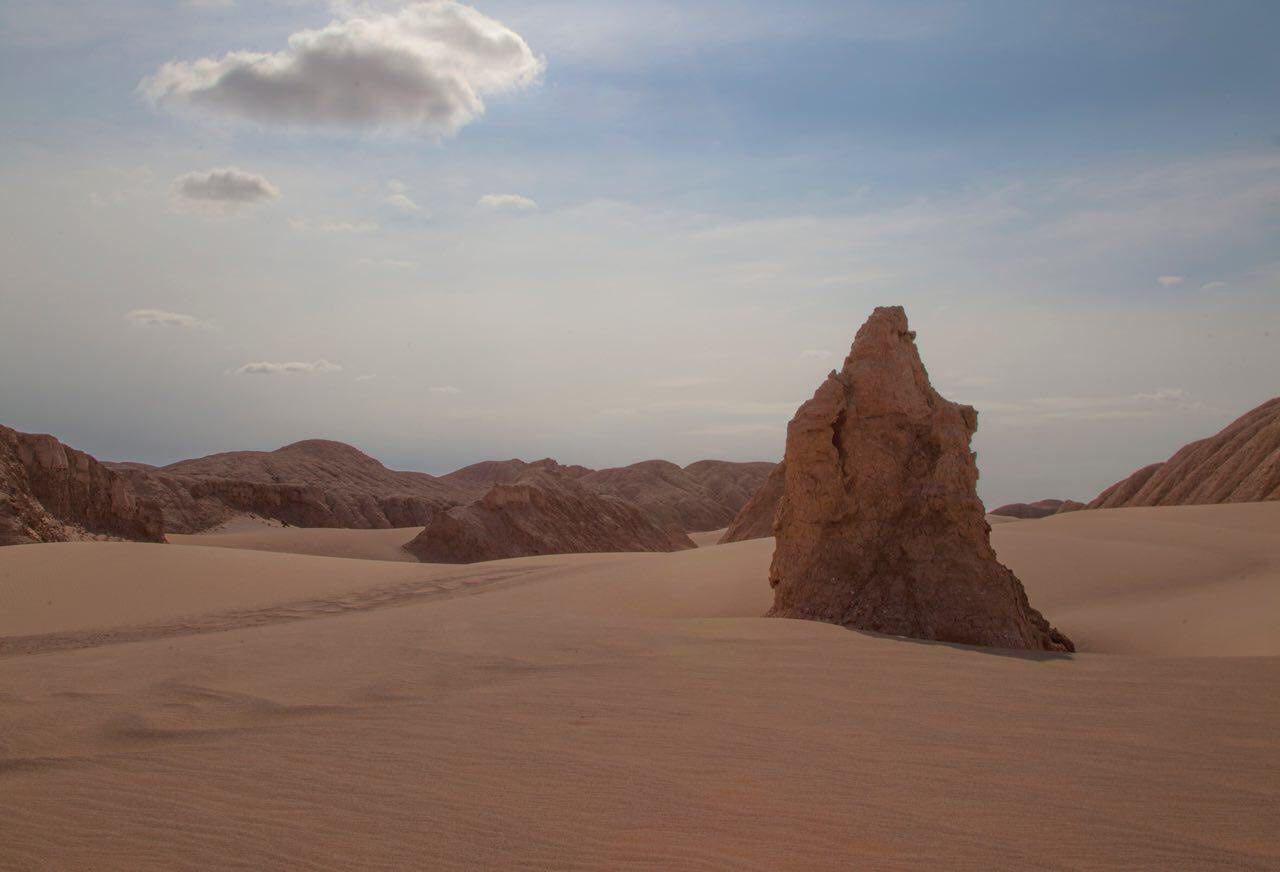 In her ongoing expo, she has showcased the photos she had taken of the nature in the South Pole and Loot Desert next to each other. She pointed to the idea and said after coming back home from her journey to the South Pole, she had become curious to know where the hottest place on the earth was.

“Much to my surprise, I realized that the place is located somewhere in my own country, Iran. The hottest region on the Earth is Gandom Berian located in the proximity of Shahdad in Loot Desert – a part of which is in Kerman Province. Gandom Berian is visually a very beautiful place the likes of which are only found in Arizona, the southwestern US state. I, immediately, packed for the trip. There, I took photos extremely similar to the ones I had taken in the South Pole. I, later, decided to hold an exhibition of those photos, to show the striking similarity of the two radically different places and provide more people with the opportunity to see those beauties.” 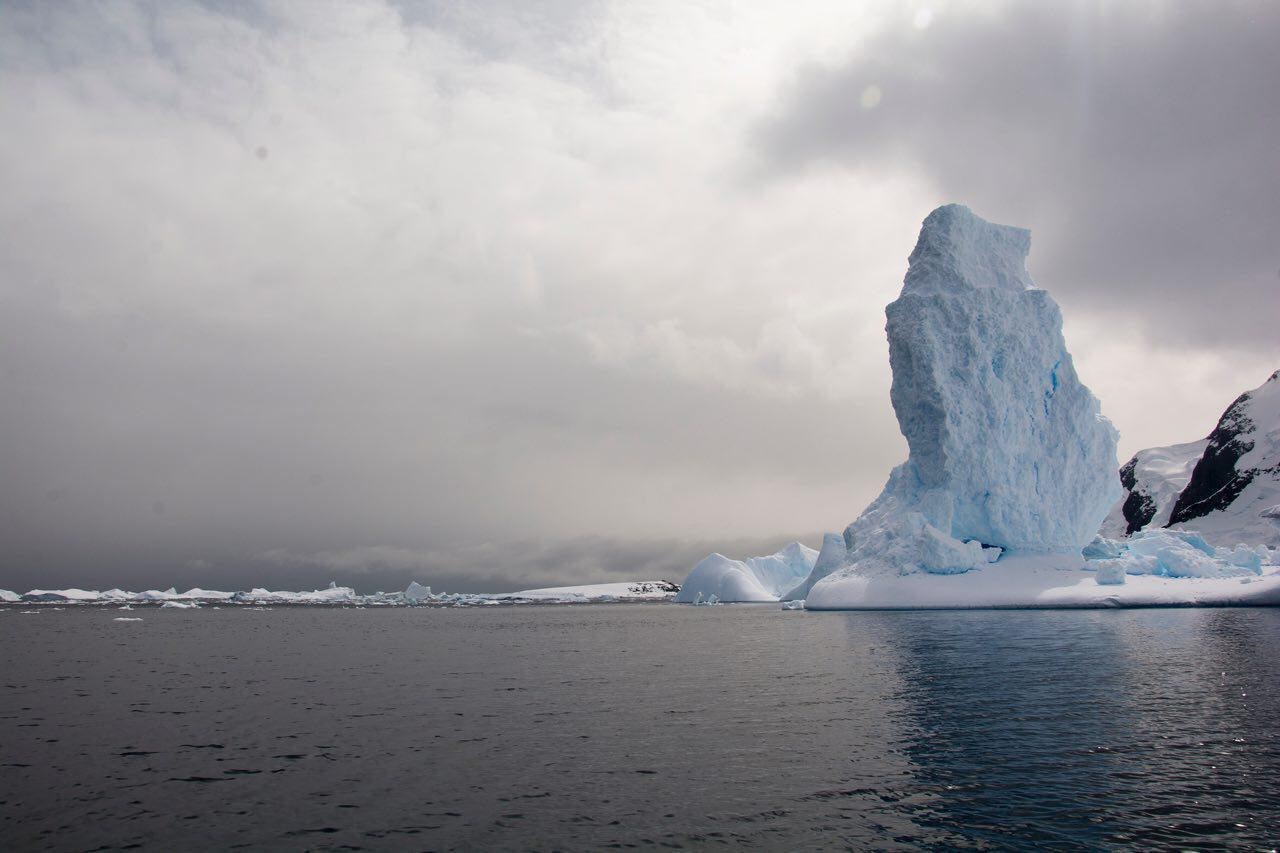 In addition to showing the beauties, by holding the exhibition she was pursuing a more important goal: Signing a petition demanding Iran’s membership in the Antarctic Treaty System (ATS). The planet Earth is the habitat of all human beings. It is a small but glorious planet which has provided human beings as well as other living creatures with the opportunity to experience life. Thus, the continuation of different species’ life on earth depends on the continuation of the life of the planet, itself.

The Antarctic Treaty and related agreements, collectively known as the ATS, regulate international relations with respect to Antarctica, the only continent on Earth without a native human population. The treaty, entering into force in 1961 and having 53 parties as of 2016, sets aside Antarctica as a scientific preserve, establishes freedom of scientific investigation and bans military activity on that continent. A large number of Asian countries as well as Iran’s western and eastern neighbours are among the signatories to the treaty and have signed the Protocol on Environmental Protection to the Antarctic Treaty. They also have permanent bases in that continent.

This is while, despite its special geographical location and being among the countries from which a number of people have had the chance to visit the South Pole, Iran is not a signatory to the treaty.

Stressing the necessity of Iran’s accession to the treaty, Khalkhalian said, “Iranians can have direct access to the South Pole through Makran [coast along the Gulf of Oman] and have been among the pioneers of travelling to the continent in Asia. Abdollah Omidvar, an Iranian tourist, was the very first representative from Iran and Asia to set foot on the continent in 1966, only five years after the coming into force of the Antarctic Treaty. Now, we, all those who have signed the petition, demand the Iranian government and all related domestic and international organizations to prepare the ground for Iran’s accession to the treaty and its signing of the Protocol on Environmental Protection to the Antarctic Treaty and recognizing the country’s right to carry out field studies in the continent and establish a permanent base there.”

Khalkhalian also hoped that despite the numerous ongoing political and cultural conflicts on the earth, it is still a planet which belongs to all people, irrespective of their differences in race, culture and nationality.

“I wish peace could be kept in the continent and be brought about in other parts of the world.”