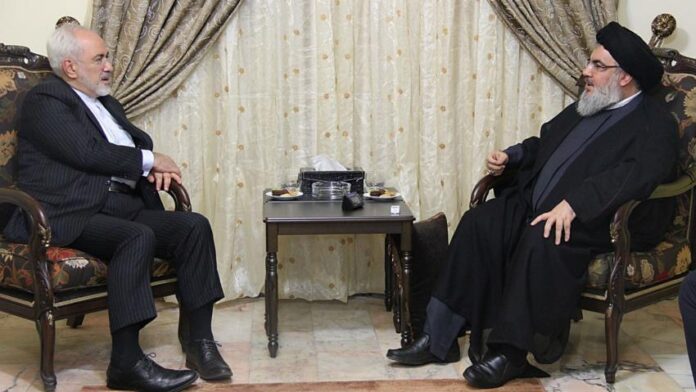 Secretary General of the Lebanese Hezbollah Sayyid Hassan Nasrallah has sent a letter to Iranian Foreign Minister Mohammad Javad Zarif to voice support for the top Iranian diplomat who has been blacklisted by the US.

In a letter released on Wednesday, Nasrallah praised Foreign Minister Zarif for standing against the US by disclosing the truth, saying the US plots against Iran are doomed to failure, like those hatched against Lebanon in the 2006 war.

What follows in the text of the Lebanese leader’s letter to Zarif:

Dear brother, Dr. Mohammad Javad Zarif, the honorable Minister of Foreign Affairs of the Islamic Republic of Iran;
May the peace, mercy and blessing of Allah be upon you;

When the American authorities announced the imposition of sanctions on you and added you to the list of the honorable people, I and my brothers decided to send you a message to express our solidarity and respect; but I preferred to postpone issuing the message until today, August 14, the day on which the Lebanese resistance could defeat the US and the so-called Israel with the full support and backing from the Islamic Republic of Iran during a 33-day war in July and August 2006.

The decisions and plots in that cruel war and grave invasion were made in America, and were under the authority of the powerless administration of George Bush the son, Condoleezza Rice, and John Bolton. The Israeli army, alleged by them to be the strongest army in the region, was merely an instrument for operation in that war.

Bolton, the then US envoy in the Security Council, had told one of the Arab officials in that war, “There is no room for diplomatic activity, because the war would not end unless with Hezbollah’s destruction or surrender.” But a few weeks later, Bolton told that Arab official, “We must finish the war right now.”

“Did you destroy Hezbollah?” the Arab official had asked him.

“Did you force Hezbollah to surrender?”

“So why are you ending the war?”

“Because if the war continues, ‘Israel’ will be gripped by a tremendous catastrophe,” Bolton had replied.

Bolton, who threatens to overthrow the Islamic Republic’s establishment, has had no achievement or victory in his life. On these days back in 2006, the US retreated and was defeated in the face of popular resistance from a country with a small area and embroiled in internal disunity, let alone in the face of a great regional country, a united nation, a coherent establishment, and an august leadership.

Mr. Minister; you are a loud voice in all international venues, who discloses the truth, expresses what is rightful, and shouts it before the eyes of the world’s unruliest tyrants, namely the US and Trump and all individuals of the same type, and this is the biggest jihad.

They sought to besiege you, push you away, and intimidate you, but your presence and influence were strengthened and your position was elevated; and God willing, you will continue to remain an advocate of the oppressed and those resisting in the same way.

May God protect and help you.