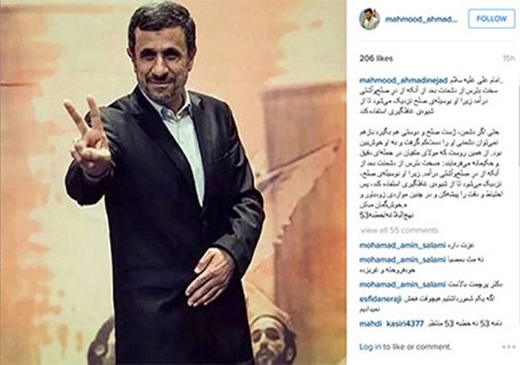 Former President Mahmoud Ahmadinejad, in an Instagram post on the conclusion of a nuclear deal with P5+1, has cited a hadith from Imam Ali, calling for caution to be exercised against the enemy.

Mahmoud Ahmadinejad, the former Iranian president, has shown a guarded reaction to the historic deal Iran and six world powers clinched on July 14.

Ahmadinejad was widely known for his blistering comments against the West and fierce opposition to the demands of the Western countries in nuclear talks. Under Ahmadinejad, Iran’s nuclear dispute with the West failed to produce a breakthrough, with the president who was the head of the Supreme National Security Council downplaying the economic sanctions imposed against Iran as “worthless paper”.

Alef.ir on July 15 released a report on the former president’s online reaction to the landmark deal and the implicit note of caution he has sounded in his first reaction to the Iran Nuclear Deal. An Instagram message he posted following the historic deal can be an expression of “worriedness” about Iran’s nuclear deal with world powers. The following is the translation of report:

In his Instagram page, Ahmadinejad has posted a hadith from Hazrat Ali, the first Shiite Imam (Peace Be Upon Him), which reads, “Be deeply afraid of your enemy when s/he reaches out to you in peace and compromise, because your enemy approaches you under the cover of peace to catch you off guard”.

Even if the enemy takes on a gesture of peace and friendship, his or her animosity should not be underestimated and you should not be optimistic about him or her. That’s why the Master of the Pious Faithful [a title for Imam Ali] has said in a wise and shrewd comment, “Be deeply afraid of your enemy when s/he reaches out to you in peace and compromise, because your enemy approaches you under the cover of peace to catch you off guard. So exercise vigilance and care, and do not be credulous and optimistic in such circumstances”.