FM Zarif Warns US about Triggering Arms Race in Mideast 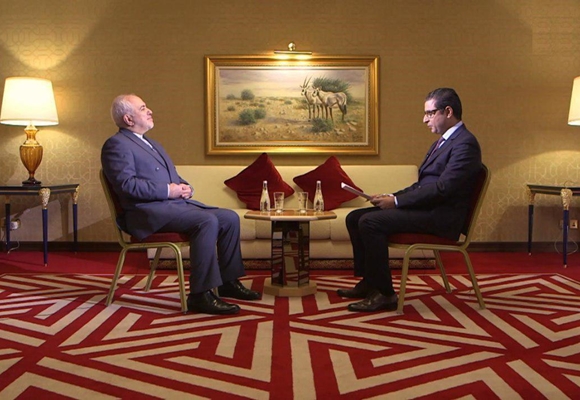 Iranian Foreign Minister Mohammad Javad Zarif has warned against an arms race in the Middle East, saying recent US weapons sales have turned the Persian Gulf region into a "tinderbox ready to blow up".

In an exclusive interview with Al Jazeera on Monday, Zarif said more warships in the Persian Gulf would only lead to more insecurity.

“The US [sold] $50bn worth of weapons to the region last year. Some of the countries in the region with less than a third of our population spend $87bn on military procurement,” Zarif told Al Jazeera in Qatar’s capital, Doha.

“Let’s make a comparison; Iran spent last year $16bn on all its military with almost one million people in the army. The UAE with a total population of one million spent $22bn, Saudi Arabia spent $87bn,” he continued.

Zarif’s comments come after the United States announced it is working to form a military coalition to protect commercial shipping in the Persian Gulf following suspected attacks on oil tankers near the Strait of Hormuz.

Tensions have soared in recent months around the strategic waterway, where about 20 percent of the world’s oil passes through.

The friction is rooted in US President Donald Trump’s decision in May 2018 to unilaterally withdraw Washington from a landmark nuclear deal signed in 2015 between world powers and Iran.

Since then, the US has reinstated sweeping sanctions against Tehran as part of a “maximum pressure” campaign and has also increased its military presence in the region.

Tensions between the two nations escalated again in May, when Washington accused Iran of sabotaging tankers in the shipping route, allegations denied by Iran.

In June, Iran downed a US military spy drone in the Persian Gulf with a surface-to-air missile. Iran says the drone was in its airspace, but Washington says it was in international skies.

At the time, Trump said he had been prepared to attack three Iranian targets in retaliation but called off the operation at the last minute because such a response would not have been “proportionate”.

In his remarks to Al Jazeera on Monday, Zarif said the presence of US and foreign naval fleet never produced “security”.

“This is a tiny body of water and the more foreign naval vessels you have in this body [of] water the less secure it is for everybody. Based on experience, the presence of US and foreign naval fleet in the Persian Gulf has never produced security,” he said.

“We have sad memories of a US ship downing an Iranian airliner in 1988 [and] killing 290 passengers.

“We believe the best the Americans can do for protection of maritime navigation is to just leave people alone. Don’t interfere, this is a hostile act against Iran and I don’t believe any other impact other than insecurity,” Zarif added.

Iran’s relations with the United Kingdom have also been strained since British authorities early last month seized an Iranian tanker off the coast of Gibraltar on suspicion it was transporting oil to Syria in breach of European Union sanctions. Tehran denied the allegation, accusing the UK of acting at the behest of the US and demanding the immediate release of the ship.

On July 19, Iran seized a British-flagged tanker in the Strait of Hormuz, claiming that it had collided with a fishing boat and violated international law.