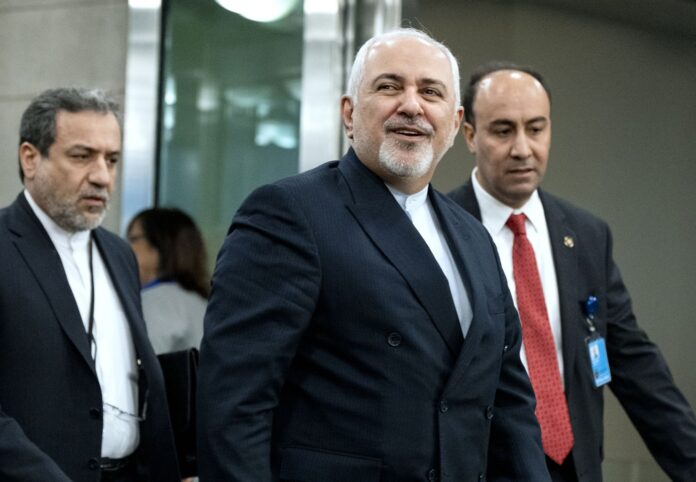 The Iranian foreign minister says he has received phone calls from a number of US legislators during his recent stay in New York.

Mohammad Javad Zarif said the lawmakers talked with him on the phone as his stay in New York was too short and the members of Congress were unable to arrange meetings with him.

Speaking in an interview with the Islamic Republic of Iran Broadcasting (IRIB) before leaving New York, he said the US lawmakers were busy impeaching the US president, but he did not discuss the issue with them as Iran does not interfere in the US internal affairs.

Elsewhere in the interview, Zarif responded to a question about Tehran-Riyadh tensions, and a message by Saudi Crown Prince Mohammed bin Salman delivered by Pakistan Prime Minister Imran Khan to President Hassan Rouhani in New York.

Asked if Iran had, in turn, sent any messages to Riyadh in response, Zarif said, “All of our messages are open and public, and that is, we have told all of our neighbours and we tell them again that they cannot obtain security by purchasing weapons from the United States and paving the way for the Americans’ presence in the regions and triggering endless wars with their neighbours.”

“Security is ensured through people relying on themselves and cooperating with their neighbours. Mr. Rouhani’s repeated proposal at the General Assembly was in order for Iran to once again put forward, at the highest level, the idea of regional dialogue for peace,” said the foreign minister.

He hailed those who brought messages for Iran and who tried to stem the spread and escalation of tensions.

“But the way to stop the escalation of tension is clear under the current circumstances. End the war on Yemen,” said the top Iranian diplomat.

“End the war on Yemen. It means end the killing of hundreds of thousands of people killed so far; 2.3 million have contracted cholera, 20 million are starving. If you end tension in the region, it will also stop Saudi Arabia from being discredited more. This is the best solution,” he said.

The Problem Is Europe, Not US

Zarif was asked about the reason behind the numerous meetings between European authorities and Iranian officials in New York.

“They failed to deliver on their commitments under the JCPOA and also they failed to fulfill their obligations after the US withdrawal from the JCPOA. They think the solution would be for us to hold talks with Mr. Trump,” he said.

“It is no our problem that they have difficulty living up to their commitments, or that they lack enough willpower to make good on those obligations. They need to work out a solution for this problem,” he added.

“We do not intend to subject the economy and future of the people to a show meeting with a president who has not remained committed to his obligations so far and has reneged on all of his commitments,” he said.

US Should Lift Sanctions

The Iranian foreign minister reiterated Tehran’s stance that Washington should lift all of its sanctions against the Islamic Republic.

“We have said time and again, as the Supreme Leader has, that if the Americans want to get the chance to hold talks with the Islamic Republic of Iran, they should return to their commitments and stop sanctions,” Zarif noted.

Zarif also touched upon the fate of the Instrument in Support of Trade Exchanges (INSTEX), which is a European special-purpose vehicle (SPV) established in January 2019 to facilitate trade with Iran despite the US sanctions.

“It depends on the Europeans. The fate of INSTEX really depends on the point that Europe should come to realize that it cannot get permission from the US for anything it wants to do,” he said.