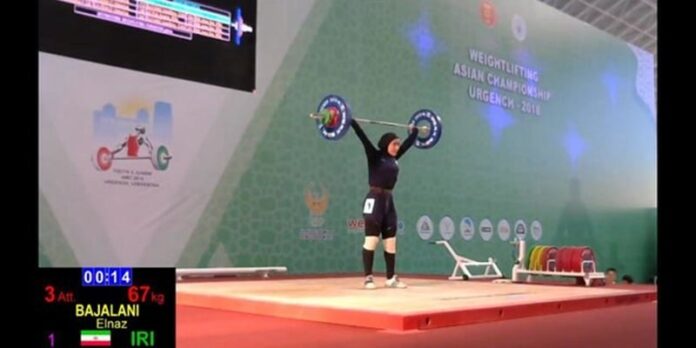 The first team of female athletes in Iran’s weightlifting history has made their presence felt in Uzbekistan’s competitions.

The four-strong team is currently in Uzbekistan to attend the Asian Youth and Junior Weightlifting Championship. The team is led by Reyhaneh Tariqat, the deputy chairwoman of the Iranian Weightlifting Federation for women’s affairs.

As the Iranian women athletes are first-timers, naturally they are not expected to set very good records in their first overseas event.

Still, the breaking of a 70-year spell is a significant development for Iranian female weightlifters. This will blaze a trail for Iranian women weightlifters to wrestle with steel and tussle for international and Olympic medals as men do.

The four members of the Iranian Female Youth Weightlifting Team include Parmida Mahmoudian, Elnaz Bajelani, Mahdieh Kolali and Seyyedeh Narges Mirzaki in the 58, 63, 69 and plus 75kg categories, respectively. The four athletes had an interview with the Persian-language Varzesh3 sports website while in Uzbekistan for the contests.

Mahmoudian: I was afraid of standing behind the weight, but …

Parmida Mahmoudian, whose name has gone down in history as Iran’s first female weightlifter in international contests, competed in the 58kg division and finished sixth. The presence of this weightlifter received extensive coverage and even led to the creation of the Parmida Hashtag on social media networks in support of the Iranian sportswoman. This is what she said about her first experience in the Asian competitions:

Concerning the fact that she was the first Iranian woman with the Islamic headscarf that took part in the contests, she said, “They had designed very good clothes for us, and lifting weights caused me no discomfort.”

Bajelani: Women, Too, Can Succeed in Weightlifting

Elnaz Bajelani, Iran’s second representative in the women’s weightlifting contests, competed in the 63kg category and has, so far, had the best performance of all team members by having finished fifth. This is what she told Varzesh3 about her sweet experience:

“I feel proud for having taken part in the contests for the first time and being a member of Iran’s first female team. That we could lift weights with Islamic outfits approved by officials made us happy.”

In reaction to those who believe weightlifting is a man’s sport, she added, “It’s right that weightlifting is a physically demanding sport, but it’s no reason for women not to succeed in it. I assure you that Iranian women, too, can pull off many successes in the future.”

Mahdieh Kolali has attended the competitions in the 69kg category. As for how she felt during the competitions, she said, “I’m very glad to be a member of the first women’s team in Iran’s weightlifting history. I wasn’t stressed out at all, and I managed to repeat the records I had set during my exercises. I had a very good experience, and the kind of outfit I was wearing indicated my difference with others. I assure you that wearing the Islamic headscarf is not a limitation for us, whatsoever, and I promise to bring medals for my country in the coming years with this very

Mirzaki: We Showed That Girls Can Also Do It

Narges Mirzaki, the athlete in the plus 75kg category, is the last of the four Iranian weightlifters to compete in the championship. In her interview, she told Varzesh3 about her presence in Uzbekistan and the contest ahead.

“It’s a good feeling to be attending Uzbekistan competitions as the first Iranian women weightlifters. We take pride in being exercising and attending the contests while observing the Islamic dress code. I will redouble my efforts in the future, and I’d like to finish among the top three as of next year. Some say women cannot be weightlifters and cannot succeed. This is not true. We four people have been practicing for four months and we’ve got here now. Definitely, other girls can come forward and succeed.”