Extremism cannot be confined to a single locality: Iran FM 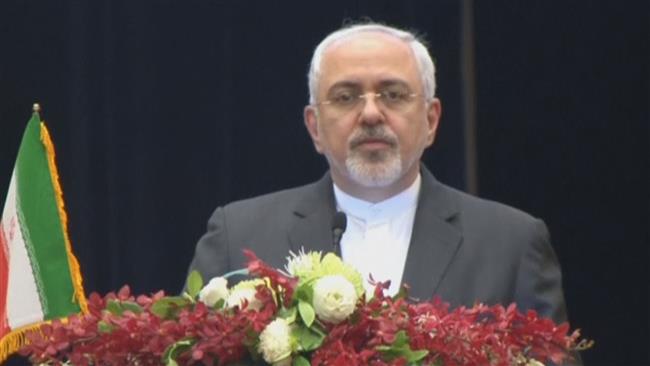 Speaking at the Thai Foreign Ministry in Bangkok on Friday, Zarif described how the world today has transformed into a globalized environment where nothing can be confined to a particular location.

He explained how news and emotions, among other things, can quickly reach widespread audiences throughout the world, defying borders of time and space.

“One thing that we have failed to recognize,” he said, however, “is [that] our security is globalized, that you cannot live in a secure world where others are suffering from insecurity. There can no longer be islands of security.”

“And if anybody had any doubts, September 11 [2001] proved that even the greatest military power on the face of the earth could not live securely when others, perverted as they may be, found the logic of force, the logic of power not serving their purpose, and reversed that logic in order to create terror.”

Zarif drew attention to the policy of some countries in believing that they can have violence in the Middle East burn the region out, and said the consequence of such a policy has only been the spread of terror.

“There is nothing that can be localized, look at our region,” he said, “Some unfortunately believe that extremism, radicalism could be contained in Iraq and Syria, that radicals, extremists and the Syrian soldiers could kill each other off. Now we see the consequences, we see that extremism cannot be contained in one locality, one country, one region, one continent.”

“Once you have extremism in one corner of the world, extremist forces all over the world will be energized and will be motivated to breed insecurity and to provide breeding ground for further extremism,” Zarif said.

He said statesmen have to realize the “simple fact” that phenomena have wide-reaching impacts beyond the region where they exist.

“We tried to do it with the nuclear issue,” he said, in reference to the Iranian administration’s attempts to resolve a long-running nuclear dispute over its nuclear program.

He said the United States had defined the nuclear dispute “in a zero-sum way.”

“The United States, during former President [George W.] Bush, had defined the nuclear issue, the Iranian nuclear program, as a program that needed to be stopped,” he said.

“Our objective was ‘this is our right, Iran has a right as an NPT member to develop nuclear technology for peaceful purposes and no one can question us,’” Zarif said.

“And that’s how we managed to hurt each other,” the top Iranian diplomat said.

He referred to how the negotiations took a shift toward the resolution of the dispute and said Iran started to redefine the problem by working on a manner of resolving the issue that everyone could consider their own.

“Therefore, a simple equation, which we can apply everywhere: zero-sum games do not exist in a globalized world, we cannot have a zero-sum game, every zero-sum game produces negative-sum results. We all end up losers,” he emphasized.

The Iranian foreign minister is in Thailand on a two-day visit to participate in the 14th Asia Cooperation Dialogue (ACD) Ministerial Meeting.

In his stay, Zarif has met with senior Thai officials, including Prime Minister Prayut Chan-o-cha and Foreign Minister Don Pramudwinai.