EU Tells Iran Can’t Do Anything without Trump Permission: Zarif 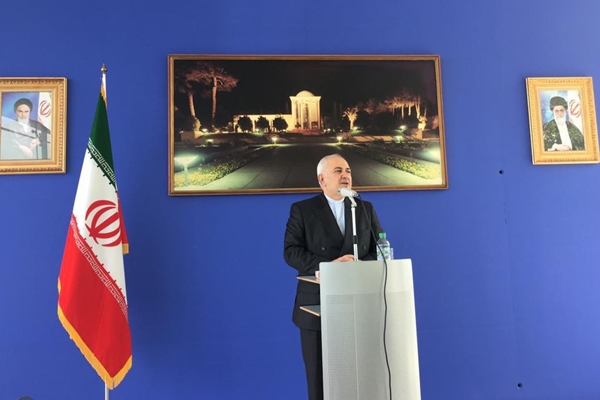 Iranian Foreign Minister Mohammad Javad Zarif has lashed out at the European countries for their failure to adopt positions independent of the US regarding the Iran nuclear deal.

“In Europe, when we talk to the president of a permanent member of the Security Council that is in possession of nuclear bombs, he tells us he can’t do anything without Trump’s permission,” Zarif said.

“If these days the Europeans are getting a little closer to the US and have become America’s ally, that’s not because they saw us in a weak position, but it’s rather due to their failure to stand up against the US. They have become Washington’s ally to preserve the rest of their reputation.”

He made the remarks during his short stay in Germany’s Frankfurt, where he met with the Islamic Republic of Iran’s diplomats, their families and a group of Iranians residing in the city.

Zarif highlighted that it’s been five months that Europe has been trying to open a credit line for the Islamic Republic in exchange for selling the country’s oil, but the bloc has not been even able to do such a small business since it is not even allowed by its master to spend its own money on its own security.

“Therefore, resistance has brought dignity to the people, and we must all accompany the people in enduring the pressure. We must know that our noble power and presence in the world arena is due to the true power of the people and their resistance against heavy US pressure. For the sake of this resistance, the United States has been plagued by political void, irritation and repulsion.”

Zarif said the diplomats of the Islamic Republic of Iran are the only ones who do not have to get orders from powers abroad to express their opinions and position.

He said the obvious fact is that “in the most difficult cases, we can make decisions without worrying about the ramifications, and I hope the sweetness of this approach will always remain with us.”

“This approach is the fruit of Iranian people’s resistance and their presence in the country’s political arena.”

Zarif said the US government has pursued its policy of maximum pressure since two years ago with utmost resentment and hatred against the noble Iranian nation.

He noted that the accusations, restrictions and pressure currently faced by the Iranian people from all walks of life, including diplomats, are unprecedented in the past 40 years.

The foreign minister went on to say that any government that relies on its own people can certainly take this approach, and what distinguishes the great Iranian people and highlights their position globally is the fact that we have found this dignity 40 years ago.

“If we stand with people and along them, and if we take our strength and advancement from the people and trust ourselves, it will be so,” said Zarif.

Of course, the path to cooperate with foreign countries is always open and our job is to provide the best for the people. We have never looked beyond our borders for the dignity, progress and development of our country, and what matters most is our faith and trust in these people, after God, underlined Zarif.

“Americans feel they have been defeated by us both on the political scene and in the regional and field arena,” said FM Zarif.

“If it had been otherwise, they would not have withdrawn from the JCPOA to isolate themselves in such a way.”

Speaking about the way the representatives of the foreign ministry of the Islamic Republic of Iran must deal with the people, he said, “Everyone with any idea, opinion, attitude or appearance who enters our embassies and asks for something must be treated in the best possible way because s/he is part of the great nation of Iran. We should not behave differently when they come to us, because whatever we have, we owe to them.”