EU Delegation in Tehran to Discuss Expansion of Business Ties 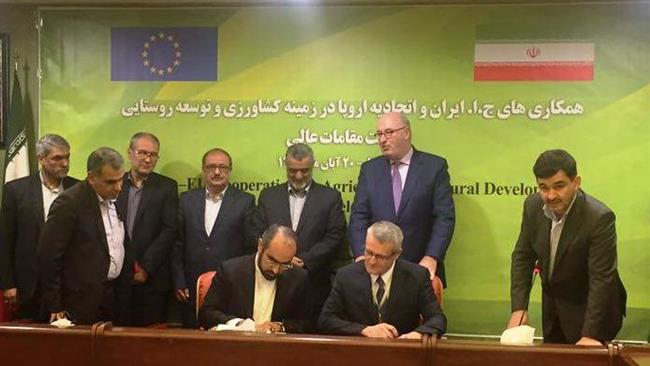 A 70-strong delegation of senior European officials and business leaders is in Tehran to examine capacities for further expansion of trade ties.

The group arrived in Tehran Saturday to participate at a conference of Iranian and EU entrepreneurs, especially those active in agriculture, food industry and rural development.

The visit may lead to the opening of an EU trade office in Iran if the group arrives at a positive assessment of capacities in the country. That would facilitate exports of Iranian agricultural produce to Europe given the impediments which currently exist on their way.

Because of its unique ecology and rich soil, Iran is one of the largest fruit producers in the Middle East and North Africa, where the diversity of climatic zones makes it possible to cultivate an assorted group of crops.

According to Iranian officials, as many as 240 million people across the region savor Iran’s horticultural products, primarily pomegranates, pistachios, saffron, figs, raisins and dates.

The country is the world’s seventh largest producer of citrus fruits, including a variety of oranges, tangerines, limes and lemons.

Agricultural exports exceed $6 billion a year, where horticultural products account for half of the earnings, with livestock and poultry coming next with a share of about 25% and crops with the other 25%.

Agriculture accounts for 13% of Iran’s GDP and over 20% of its employment. The sector has traditionally been the key foundational block of the Iranian society but it began to lose much of its significance when the first oil wells were struck.

The sector has its own detractors who say the industry is using up 92% of the country’s water and draining its water tables amid inefficient agriculture and food production practices.

In recent years, Iranian taste buds are also being put to the test amid a rise in irregular imports of fruits which many believe can’t hold a candle to the local produce.

Iran is the world’s biggest exporter of pistachios which brought it more than $870 million in hard currency revenues last year. Among the agricultural products, tomato ketchup was the second biggest export item with $150 million and saffron the third with $130 million.

The country, however, is looking to new markets and Russia features prominently among its new destinations for exports.

Iran’s exports of food products to Russia rose 35% in the first six months since March, chairman of the board of food producers cooperative Mehdi Karimi Tafreshi said on Wednesday.

Karimi Tafreshi said President Vladimir Putin had ordered Russian traders to source 20% of the country’s needs for food from Iran, which would translate to $30 billion in value if it materialized.

“Mr. Putin’s order to supply 20% of food from Iran has provided a special opportunity for our country’s food industry,” the Tasmin news agency quoted the official as telling reporters in Tehran.

Currently, Iran’s share in Russia’s agri-food imports of $27 billion is negligible. According to Karimi Tafreshi, the key issue is the high cost of Iranian products, which is due to the high cost of production in the country.

Russia has banned Western food imports in retaliation after the fallout and sanctions that followed the crises in Crimea, and an ongoing conflict in eastern Ukraine.

US President Donald Trump’s hardline stance on a 2015 nuclear deal with Iran has also raised questions about the prospects of the Islamic Republic’s trade with the West.

On Wednesday, Germany’s chemicals distributor Brenntag said it was holding off on doing business in Iran.

“I would say that we were more optimistic in the past than we are now (about starting operations in Iran),” Reuters quoted its finance chief Georg Mueller as saying.

Mueller said Brenntag examined the possibility of doing business in Iran after sanctions were lifted on Tehran but “international skepticism” about the country had prevented any moves.