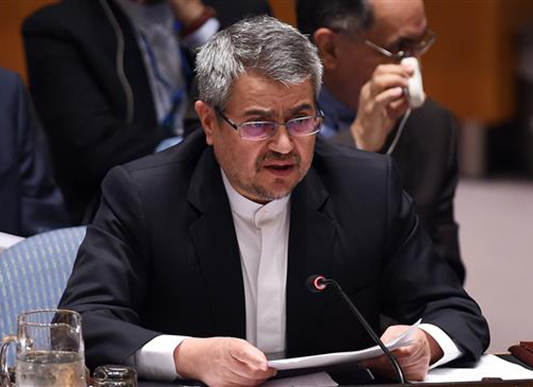 Iran’s ambassador to the United Nations highlighted the country’s strategic approach to implement the 2030 Agenda for Sustainable Development, explaining the projects Iran has devised to that end.

Addressing a general debate of the Second Committee of the 71st Session of the UN General Assembly, held in New York on Monday, Gholamali Khoshroo elaborated on the measures Iran’s government has taken to comply with the 2030 Agenda.

At the beginning, I would like to congratulate you and other members of the Bureau for your well-deserved election. You may trust on our full support during your Chairmanship. I would also like to associate myself with the statement made by the Permanent Representative of Kingdom of Thailand on behalf of the Group of 77 and China.

The Islamic Republic of Iran attaches great importance to the effective implementation of the 2030 Agenda at all levels. We welcome the theme of the Seventy-first General Assembly “the Sustainable Development Goals: a universal push to transform our world”. In the first year of the implementation of the 2030 Agenda, several measures have been taken by the Government in advancing its goals. I would like to mention only a few of them:

The government of the Islamic Republic of Iran pursues a strategic approach towards sustainable development. The National Committee on Sustainable development has determined the responsibility of various ministries and organizations for the follow-up and reporting on SDGs and established the National Network for Sustainable Development for participation of all interested people. National priorities have been set for addressing such major issues as poverty eradication, sustainable management of water and sanitation, renewable energy resources, energy efficiency improvement, climate change, housing, combating desertification, deforestation and dust storm, ensuring health and disaster risk reduction, and management, in a way that nobody and no section of the society is left behind.

At the policy and institutional levels, there have been major actions for the implementation and follow-up of SDGs, adoption of two sets of overall policy guidelines for strengthening resilient national economy and protection of environment. The first Act improves economic growth and promotes social and environmental development. The second Act, enhances protection of environment with strong emphasis on promotion of green economy and low carbon industry; addressing climate change, desertification as well as sand and dust storms; protection of biodiversity and forests and many other issues.

Furthermore, the Sixth National Development Plan addresses implementation of the Agenda 2030 at the national level while the recently adopted country program documents with UN agencies for the period 2017-2021 are inspired by the Agenda.

As a step for the second year of implementation, we intend to submit our voluntary national report for the HLPF 2017. The Islamic Republic of Iran also plans to host an international conference on combating sand and dust storms in line with implementation of the 2030 Agenda.  It is also our intention to ratify the Paris Agreement in 2017.

Our world is now more complex than it ever was. Extreme poverty, global warming, terrorism and extremist violence, humanitarian crisis, and many other issues call for a more effective United Nations. No single country can meet these challenges on its own. Our aim is to find effective solutions through enhanced cooperation among UN Member States. We know that some progress has been made and we should be inspired by this success. But various grave challenges remain unsolved.

To implement the Agenda 2030, our region particularly confronts severe challenges. It is not only facing common ones such as poverty, land degradation, desertification, water scarcity, hotter climate conditions and continued extensive drought, but also grappling with the scourge of terrorism and extremist violence. Their outcome while exacerbates poverty and environmental destruction, forces governments to spend their limited national resources on fighting insecurity rather than development.

The implementation of the ambitious objectives of the Agenda should be facilitated by even more ambitious, fully inclusive and non-discriminatory measures. It requires more effective international support and solidarity and the full implementation of SDG 17 particularly through capacity building, technology transfer, trade facilitation and access to financial resources as well as refraining from any form of unilateral or coercive economic, financial or trade measures.

I wish to conclude by expressing our sincere hope that the 2030 Agenda will be instrumental in bringing us together for furthering our collaboration and partnership towards achieving the SDGs. We are confident that, with the spirit of true partnership, cooperation and solidarity, we can transform our commitments into action.